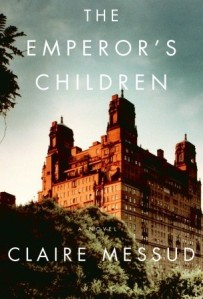 In the years since September 11th, 2001 many authors have tried their hands at the 9/11 novel, with all of its delicate subject matter, and thus far they have met with only limited degrees of success: Jonathan Safran Foer, Julia Glass, Wendy Wasserstein, and others have centered novels on the pre- and post-9/11 era, and now Claire Messud takes her turn with The Emperor’s Children, a novel set during the months preceding and immediately following that horrific day. The titular ’emperor’ is Murray Thwaite, a prestigious journalist living the quintessential Manhattan lifestyle: fame, money, parties, and the adoration of literati and socialites alike. He has cultivated an image based on truth and integrity, although those characterstics are notably lacking in his actual person. His ‘children’ are the people immediately surrounding him, captivated by his presence and hoping to coast on his celebrity with varying degrees of maliciousness. At the novel’s onset most of them are suffering from some form of paralysis about their life’s direction. First and foremost is Marina, Murray’s daughter, who seems hopelessly trapped in a prolonged adolescence — afraid that if she grows up and tries to make her way in the world she will be unable to live up to her famous father’s reputation (the thought of disappointing him is particularly troubling to her). It is easy to forget that Marina is 30 years old because she is quite deliberately written like a high school aged socialite. Then there is Murray’s nephew, Frederick “Bootie” Tubb, who has grown up in awe of his distant uncle and comes to Manhattan after dropping out of college to ask him to be his mentor. Bootie, an intelligent but overly philosophical and idealistic young man, quickly becomes disillusioned with Murray (for who could possibly live up to the lofty expectations that celebrity produces?), and becomes determined to expose his uncle for the charlatan he believes him to be. Complicating things further is Ludovic Seeley, a smarmy Australian businessman who has come to Manhattan to start his own magazine — and aims to shake up the existing journalistic order by dethroning the reigning king. Ludovic is such an arrogant cliche that all he needs is a mustache to sinisterly twirl to be an outright cartoon. Lastly, there are Marina’s best friends: Julius, a gay hanger-on from chilly Michigan eager to make an impression on the New York social scene, and Danielle, who is presumably the humane center for the novel to pivot on, but suffers from such ludicrous Ally McBeal-esque crises in her love life that her credibility is dangerously suspect after the first hundred pages. The characters are uniformly pretentious and are alternately mildly and seriously annoying, but Messud manages to propel her novel forward despite their intrinsic unlikability because, as shallow as they are, they are all multi-layered, complex, believable people. The many threads comprising the narrative are expertly weaved together for some compelling character studies (even if you wouldn’t necessarily want to hang out with the lot of them). But that willingness to stick with their stories is, at least for me, predicated on the belief that they will be changed people by the novel’s end. They aren’t. And while the narrative is expertly crafted, Messud has a penchant for overusing commas in her prose that becomes, increasingly, irritating, as she uses them to stretch out her sentences, and to add separate thoughts, or descriptive elements, and even, occasionally, dialogue, so that they feel like run-ons, like this one right here, this example I’ve devised for you, but are, for the most part, technically, grammatically sound, even though you may have to re-read the most trying sentences a second time, just to figure out what she is saying, without letting all of her distractions get in the way.

Messud does an admirable job building suspense as the chapters go by and September 11th draws near. There is a great degree of foreshadowing to be found, some directly indicating that September will be a month of great change, what with Ludovic’s magazine set to launch on the 13th and a wedding to take place, but naturally none of the characters can predict just how fateful the month will prove to be. The sense of impending disaster looms large in The Emperor’s Children, and it is quite unfortunate that the novel loses steam when tragedy actually strikes. Indeed, 9/11 is almost anticlimactic when it occurs, serving merely as a catalyst to wrap up everyone’s story lines. It was unbearably annoying to endure the outrageously selfish way that the characters responded to the attacks and the gross loss of life that they witnessed. In the late afternoon of that day, after the towers had fallen and Manhattan’s skyline was irrevocably altered forever there wasn’t a lot of soul searching going on in the hearts and minds of these characters. All they care about are their own petty problems and how the terrorists ruined their carefully planned calendars (I felt like throwing the book across the room in disgust when Ludovic had the audacity to go on a tirade about how his precious magazine’s launch had to be cancelled). I live in the tri-state area, about an hour and a half away from Ground Zero, and the events of that day and the intense mourning that followed will be with me for the rest of my life, and what Messud has critically failed to capture is the way that 9/11 actually brought a grieving city closer together for a brief moment in time, and how for once people put aside their petty complaints to work on the larger issue at hand. I remember crying at work alongside my stunned colleagues and the reassuring hugs we gave each other, the phone calls I made to — and received from — people I hadn’t even spoken to in months or even years, just to make sure that they were all right. I remember the eagerness with which people helped each other out, whether the need was great or small. This incredible outbreak of brotherly love earned the admiration of the world, but it is conspicuously absent from Messud’s telling. One character uses the tragedy for personal gain career-wise, one uses it as an excuse to wallow in self pity (not for anything to do with 9/11, mind you, but for strictly personal reasons) … I don’t want to give too much away by outlining the callous behavior that offended me so much, but in my opinion it was woefully inappropriate. I had hoped that tragedy would change the Emperor and his Children for the better, but I was wrong. And it’s a shame. Messud is definitely a capable, promising writer — but this isn’t her finest hour.