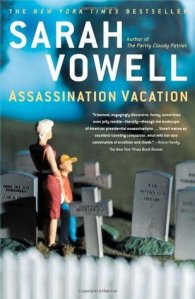 “Being part of history is rarely a good idea.”

Man, I really wish I had crossed this one off of my to-read list sooner. You see, I enjoy history, but I have a hard time getting into nonfiction books. Most of them are bone dry and deadly dull, in my experience. Wading through the options to find a good one was always excruciating to me.

I always preferred taking a history class with an instructor who had a lot of personality. One of my high school history teachers got so into tales of medieval mayhem that he’d dart back and forth between two blackboards, desperately scrambling to find space to scrawl out more information as he told us about the black death. His enthusiasm and wit made the subject come to life for the first time, and not just be a collection of names and dates. Later, when I took a college history class about the Reformation, I encountered a cantankerous and alarmingly elderly professor. Perhaps due to his age, he sat down the whole class and just told us stories, occasionally lobbing acid barbs at the jocks unsuccessfully trying to hide in the back row. It was captivating. He made Reformation England the best soap opera not on television. It was the first time I thought of history as having a narrative, just like a novel but real. People in the past had personalities! Who knew? The following semester I took a class on the Civil War with a professor who could only be described as a bitchy queen, but that man knew his shit and was hilarious. He could have had an amazing TV show: The Bitchy Queen’s Guide to History. It would win every single Emmy, and he’d roll his eyes at least once in every acceptance speech.

Those are the people who made history come alive to me. The reason I’m telling you all this is because you can add Sarah Vowell to that list now. She’s droll, witty, and totally sarcastic. I love it. “You know you’ve reached a new plateau of group mediocrity when even a Canadian is alarmed by your lack of individuality.” Hilarious. So is this: “Like Lincoln, I would like to believe the ballot is stronger than the bullet. Then again, he said that before he got shot.” But she’s also crazy informative and ridiculously thorough. She understands history from all angles. She knows all the competing theories. She knows all the events that caused one thing to lead to another and is capable of conveying that information without giving you a migraine.

Best of all, she has an emotional relationship to history. In this book, Vowell explores the assassinations of Lincoln, Garfield, and McKinley, and during her quest she makes an effort to understand each of them. What kind of men were they? We’re not just looking at how they died, we’re looking at how they lived. When she visits McKinley’s memorial Vowell remarks that she didn’t feel any closer to the former president, but when she visits the plaque commemorating the location where he was fatally shot she is surprised to find herself emotionally overwhelmed. She visits the neighborhoods they called home, the locations where they worked, and the museums that house their belongings, all to get a better sense of who they were.

It’s not just the presidents who get this treatment, it’s also the men responsible for their deaths and others who were affected by them. She visits the location of the barn where John Wilkes Booth was killed after law enforcement caught up with him. She checks in on the Grammercy Park statue of Wilkes’ brother Edwin, who was a celebrated actor in New York despite his infamous sibling. She hangs out on the decaying pier in Long Branch where President Garfield was taken to die. She periodically checks in on Robert Todd Lincoln–Abraham’s eldest son, who was present at all three assassinations covered in this book. She even takes a jaunt to the Dry Tortugas off Key West (and gets seasick in the process), just to see where Dr. Samuel Mudd–who may or may not have been a conspirator in the Lincoln assassination–was held.

The sense you come away with, beyond the knowledge of the assassinations, is the sense that history is a living organism, continuing to be shaped and molded every second of every day. As a New Yorker, I just so happen to live in one of the cities she frequently mentions. I actually noted each of the locations in case my path ever crosses the historical markers. Best of all was when she mentioned the Fifth Avenue Hotel, where the Republican party of Garfield’s day did a lot of its wheeling and dealing. It was located on 5th and 23rd St.–the very same corner I work on. I was almost late for work because I had to run across the street and scout out the location I thought she was talking about (I was right! The building where Eataly is stands there now). I spent my lunch break walking through Madison Square park to find the statues of Chester A. Arthur and Roscoe Conkling that she mentioned. I have a completely new sense of the space I work now–I understand something of the history of my place, what is here now and what was here before, and it’s exciting!

That’s what is so great about Assassination Vacation–it brought out the history nerd in me, which has been relatively (sadly) dormant ever since I finished reading Tony Horwitz’s Confederates in the Attic. It actually took me longer to read than it should have because I kept stopping to do internet research for myself to find out more or to see what Vowell is describing for myself. And I cannot wait to pick up another one of her books to do it all again.