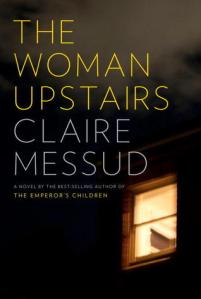 “I want to make my nothingness count.”

First, I should tell you that Claire Messud and I have a complicated history. To be blunt: I hated her last book, The Emperor’s Children. It made me so angry. Looking back at my review (you can read it here), I see that perhaps a lot of this wasn’t exactly fair–she hit some kind of a nerve as relates to 9/11 in this New Yorker’s heart. I wrote the review in anger, but it was an honest reaction to the book, and I stand by some of the more pointed criticisms of characterization and comma use. So you can understand, I’m sure, that I was hesitant to read her new novel. Well, I was in for a huge surprise.

The novel opens: “How angry am I? You don’t want to know. Nobody wants to know about that.” It proceeds to use the ‘f’ word twice on the first page alone (once in all caps), and the narrative propels forward as if driven by rage itself. It’s captivating. You can’t tear yourself away from it, yet you find yourself sickly savoring it. And that’s part of the genius in Messud’s novel: you the reader become almost culpable in the festival of schadenfreude the narrator, Nora, is drowning in.

Nora is a schoolteacher who longed of being an artist. Nearing forty, she has put off her dreams to live a life of quiet desperation–alone and unrecognized by the world at large. She likes to think that she did it for noble reasons (taking care first of her dying mother, then for her increasingly frail father), but even she can’t stomach the lie in this. She knows that a great part of her failure was her own fear and insecurity, and this self-knowledge disgusts her. Nora defines herself as one of the forgotten women upstairs–going to great lengths to define the term as the novel progresses (forget your stereotypical spinster or images of Jane Eyre’s fiery finale).

“In our lives of quiet desperation, the woman upstairs is all we are, with or without a goddamn tabby or a pesky lolloping Labrador, and not a soul registers that we are furious. We’re completely invisible. I thought it wasn’t true, or not true of me, but I’ve learned that I am no different at all. The question now is how to work it, hot to use that invisibility, to make it burn.” 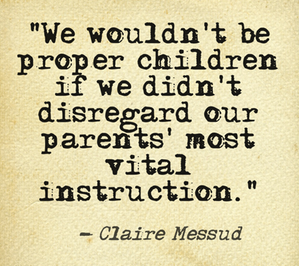 This ‘nothingness’ is briefly challenged when the Shahid family sweeps into Nora’s life. Intellectual, stimulating Skandar; sweet, beautiful Reza; and most importantly Sirena, who beguiles Nora by having the life–and confidence–she most dearly desires. She becomes obsessed with them even though she knows they are only living in the US for a single year, that the ties they share are doomed from the beginning. She knows that it is desperation making her cling to them, but she recklessly gives into it anyway, blissfully unaware of the depths of betrayal her fling with the Shahids will sink her to.

The Woman Upstairs also deals with questions of art and what makes a good artist–a theme I was particularly interested in having just finished Meg Wolitzer’s novel The Interestings. But Messud takes the idea in a different direction–making one wonder not only about the talent aspect of what makes an artist successful, but directly questioning what type of person is capable of succeeding in such a ruthless environment.

Still, it is the rage that makes this novel soar. A fire that raging would consume any other writer’s novel in no time at all, but Messud makes it burn longer and brighter than it has any right to.

Well what do you know? I’ve written a scathing review of one Messud book and a glowing one for another. I may have to get checked for whiplash …

PS As per my mission statement, I am obligated to tell you that I received this book as part of the Amazon Vine program.