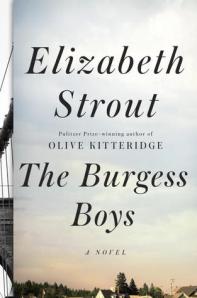 “Nobody ever knows anyone.”

Jim and Bob Burgess couldn’t be more different. Bob is sensitive, not very confident, casually self destructive, and dangerously toying with alcoholism. Jim is a brash high-powered attorney with a fancy townhouse in a trendy part of Brooklyn. He’s also a huge jerk, but people are very forgiving of this quality because … well, it isn’t really clear why people put up with him. Maybe it’s the money? Or genetic/marital ties? It’s implied that he used to be a man of principle but the more you get to know him the more you wonder if people are just confusing confidence with morals. Anyway, if Jim and Bob weren’t brothers they’d likely hate each other. They may hate each other anyway. Oh, there’s also a sister named Susan, but she’s never counted for anything her entire life, so she doesn’t rate a mention anytime anyone discusses the family (even forgotten in the book’s title! BURN!). Susan never really has a role as anything other than a plot catalyst, so forget her (everyone else apparently has, anyway).

Are you getting the sense that I didn’t really like The Burgess Boys? Here’s the thing: it’s a perfectly fine novel. But the characters are irritating and, ultimately, all of the themes ring hollow. There’s even an introduction that has absolutely nothing to do with the rest of the book. The only purpose it serves is to queue the reader to an idea that I suppose was intended to be central to the story: “Nobody knows anyone.” Jim and Bob (mostly Jim) have secrets they’ve kept from each other and will be forced to reevaluate their relationship. Jim and his wife Helen have been partners and best friends for a long time now, but they suddenly feel strange to each other as their last kid heads off to college. Susan’s shy son is bereft that his father suddenly abandoned them to move to Sweden, which may have driven him to commit a hate crime (more on that later). But none of it really amounts to much in the end.

Also, there’s a subplot about Somali immigrants in the Maine town the Burgess boys grew up in. I suppose they are meant to hammer in the “nobody knows anyone” idea, maybe imbue it with some global resonance. But the best Strout can do with them is repeatedly have people call them Somalian when the word is actually Somali. They are given a voice alongside the Burgess family, yet they remain cyphers.

The real problem with The Burgess Boys is that Strout seems to be asking us not to judge her characters harshly, heedless of whether or not they actually deserve judgment. Susan’s son commits a hate crime, but let’s spend the entire novel quibbling over the definition of ‘hate crime’ and, come on, he’s so shy! And his father left him! Don’t you feel bad for thinking he should be held accountable? (um, no, I don’t). Jim is a jerk and treats everyone around him like lesser human beings, but don’t you see–he’s mean because he’s broken inside! Nevermind that he’s broken inside because he committed a horrendously selfish act, or that selfishness has ruled his entire life because he never had to deal with consequences. Or that he’s probably going to continue being selfish and mean. Pay no attention to the man behind the curtain, just feel bad when you’re told to feel bad. Bob, a professional doormat if ever there was, is supposed to grow throughout the novel. In many ways he does, but has he really changed? Helen is a wishy-washy cliché who likes to feel comfortable, but let’s feel bad for her because her husband is a jerk (wait, we’re not supposed to think her husband is a jerk. So what are we supposed to do with Helen?). And that’s everyone, right? Oh wait, Susan! I keep forgetting about her. Go figure.

In addition, although Strout has some elegant sentences here and there, she frequently over-complicates things in order to make them sound pretty. “Nothing in the room seemed designed for comfort, and he felt comfortless” sounds good, but it’s also redundant. Then there are bon mots like this one: “Helen touched her earring and thought: Being a woman sucks. Then she thought: No it doesn’t.” No wonder it’s impossible to know what to think about Helen (and what’s the significance of the earring, anyway? Did Strout think we needed a reminder that the thinker is, in fact, a woman?).

It’s funny. I rolled my eyes at this book a lot while I was reading it but I didn’t think I disliked it all that much. It wasn’t until I sat down to write this review that I realized how much of it bothered me. There are good parts–Helen has a fantastic soliloquy about the feebleness of words toward the end, for example. They just can’t stand up to the inconsistencies and problems in this reader’s mind.

PS In order to honor my mission statement it behooves me to tell you that I received a free ARC of this book through Amazon.