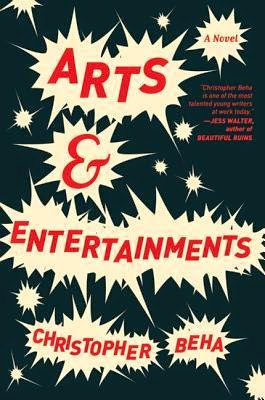 As I said in my most recent review (of Fourth of July Creek), I’ve developed a serious impatience for novels that essentially come down to white boys who can’t get their act together. As such, Arts & Entertainments was another big struggle for me. You see, it centers on “Handsome” Eddie Hartley, a high school drama teacher who used to be an aspiring actor. He never made it big and ended up teaching while a former girlfriend is now a major television star, living her life splashed across the tabloids. Eddie’s marriage is strained because his wife wants babies and Eddie isn’t sure he does, too. Now his wife needs expensive fertility treatments they can’t afford. What do you do?

If you’re Eddie, you release a sex tape of you and your famous ex-girlfriend. He tells himself that he only does it for the money, but the reality is that Eddie desperately wants to grab some of that fame for himself. The problem is that he ends up with notoriety instead–but is there really any difference in this day and age?

Arts & Entertainment wants to be a clever satire of the modern celebrity machine, but the satire only really revs up in the last hundred pages or so. Prior to that, the satire is mostly at Eddie’s expense and his unique inability to get famous. Even when it gets going, A&E doesn’t have the sharp teeth it wants you to think it does. You see, it also wants you to like the characters–and you just can’t have it both ways. Perhaps I was bound not to like Eddie Hartley because his life can be summed up as #WhiteBoyProblems, but I don’t think I’m being too unfair here.