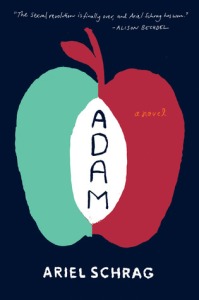 When I first picked up Adam, I confess I was simultaneously intrigued and repulsed by its premise. You see, Adam has the audacious idea to take the standard rom-com premise where someone pretends to be someone/something they’re not, and throw in gender norms and sexuality as a twist. It all starts when 17 year-old Adam goes to visit his lesbian sister in New York City for the summer. He’s determined to lose his virginity and make all his friends back home jealous, but finds himself surrounded by his sister’s lesbian and trans friends. When he falls for a lesbian at a party, Adam pretends to be trans in order to date her. Done right, it has the potential to be a scurrilous take-down of society and what is considered normal. Done wrong, it’s just plain offensive.

Well, Ariel Schrag has a lot to answer for. Because she did it wrong. Big time.

To start with, Adam has some hideously unlikable characters. You don’t need likable characters to make a book succeed (just look at Lolita–a book that made its controversial premise pay off, I might add), but I feel like in order for this book to work you need to be on Adam’s side. And you’re not. He’s a selfish, spoiled, self-involved brat. We’re supposed to think that Adam grows up as the story progresses because he eschews his prior desperation for popularity, but that doesn’t make what he does any less reprehensible.

I think Schrag was trying to make some astute points about how hard it is to figure out who you are in a world so caught up with labels, bless her heart, but the message got seriously diluted. Oh, and the story is set in 2006, but it doesn’t seem that there’s a reason for this beyond allowing characters to make constant (constant) references to the TV show The L Word, which–wouldn’t you know?–Ariel Schrag wrote for.

I don’t usually like to get into spoiler territory, but there’s no way to discuss what’s so awful about this book without going there. So if you don’t want to know, turn away now.

The real problem here is that there are utterly zero consequences for what Adam does. The truth finally comes out, and nobody thinks it was awful. He gets away with it and gets the girl in the end.

I cannot even begin to tell you how ridiculously naive that is. Not to mention irresponsible.

After finishing the book, I found an interview with Ariel Schrag where she compounds the problem by arrogantly trying to say she doesn’t understand how people could be upset about the lack of consequences. She makes it sound like Gillian, the lesbian Adam falls for, had a label thrust upon her and had always felt pressured to live up to it. But there’s precious little evidence to support that in the book.

Ms. Schrag, I admire the point you were trying to make about fluidity when it comes to gender and sexuality, but let’s be real for a second: there would be consequences for a deception of such magnitude. Even in the standard, cliche-ridden rom-coms that use this same basic premise, couples at least temporarily break up over the lie. They don’t just say “oh, you lied to me, deceived me, made me believe in something that was totally untrue, but gosh darn it now that I know you* I just love you so much.” They struggle to reconcile things.

Prior to this book, there was only one novel I ever threw across the room in frustration and anger: Angels & Demons, by Dan Brown. Now there are two.