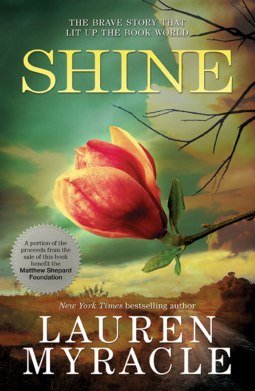 “Knowledge was more powerful than fear. Love was stronger than hate.”

You know when a book is reasonably enjoyable, but the last ten pages are so terrible that it ruins the whole experience? Not just ruins the whole book even, but makes you so mad you want to chuck the book across the room and let it sit there to think about what it’s done? That’s Shine for me.

I’m going to try to avoid spoilers, but it’s going to be hard. For now you’re safe. If you want to know what made me so mad, skip to the end of this review. I’ll give you a fair warning before we get to anything that could even remotely be considered a spoiler, but I promise even then I won’t give away any specifics.

What I liked about Shine for the first half was that it wasn’t afraid to be complicated. It wasn’t afraid to be dark. Sometimes bad things happen, it seemed to be saying, and it isn’t fair, but there are always consequences that you have to deal with anyway. The main bad thing that has happened when the novel begins is that Patrick Truman, a gay teen living in an unforgiving small town, has been found savagely beaten and left for dead. Now he’s in a coma in the hospital and there are no guarantees that he will ever wake up, or that if he does wake up that he won’t have significant brain damage. Cat had been Patrick’s best friend until she secluded herself from the rest of the world after she suffered her own trauma two years earlier. Now she’s determined to come out of seclusion to honor her friend by doing what the local police either can’t or won’t do: find out who did this to him.

It’s an investigation fraught with difficulty for Cat, not only because it means getting close to the person responsible for her own trauma (and the people who did nothing to help her), but because she knows the most likely possibility is that Patrick’s attacker was someone he knows. Which means one of his friends–and her former friends–turned on him.

Getting reacquainted with her old friends forces Cat to come to grips with some unpleasant truths about growing up poor in small town America as well. As they approach adulthood each of these teens has had a wake up call as to the limited options they face in life and grown increasingly desperate as their options have become more and more closed off to them. Meth and alcohol become omnipresent, adding a sense of queasy desperation to the story.

It’s an uncomfortably bleak honesty that seems to be sending Shine in a startling, poignant, heartbreaking direction. But somewhere along the way Lauren Myracle starts hitting false notes, and those moments keep building in momentum and taking away from Shine‘s emotional credibility.

To me, it begins when Cat goes to the library in the first half of the book and runs into a college student who inexplicably calls her a terrible slur. It’s such a head-scratcher of a moment that you just know this won’t be the last we see of this random college student. Sure enough, he returns in no time at all, and in a twist Myracle handles with all the grace of a sledgehammer he turns out to be a nice guy who helps Cat with her investigation and becomes a potential love interest. Myracle seems very interested in showing that people aren’t always what they seem at first glance, but the college student character and his storyline is handled so clumsily that his transition from racist creep to heroic nice guy never quite stopped making my head spin.

And that takes us to the ending, so stop here if you want to avoid spoilers (although I won’t say exactly what happens). The ending, oh guys, the ending. It’s terrible. After spending an entire book indicating that bad things happen and they aren’t fair and you have to deal with the consequences anyway, Myracle tacks on a truly ludicrous happy ending. And I do mean ludicrous. Literally nothing about it makes sense. Myracle tries to make everything as happy as she can possibly make it without any regard for common sense, let alone honoring the 340 pages that preceded this drivel. It also throws any notion of consequences out the window, going for treacly notions of friendship and honor instead. Even though that doesn’t make any sense either. People committed assault, rape, and attempted murder but it all gets swept under the rug at a moment’s notice with no real explanation other than some seriously misplaced notion of loyalty for their friends. I almost convinced myself that it was some bizarre acid-trip dream sequence except I think we’re supposed to take it as it’s presented to us, which is actually insulting.

In the end the only redeeming thing about this book is that a portion of the proceeds benefit the Matthew Shepard Foundation. But if you’re so inclined, you could just make a donation of your own.