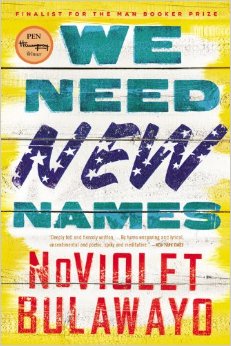 “Because we were not in our country, we could not use our own languages, and so when we spoke our voices came out bruised.”

Having a stamp of approval from Junot Díaz is not a small deal to me. In my mind he is one of the most authentic–not to mention best–authors working today. He tells stories about people mainstream literature has traditionally forgotten about or marginalized. It’s easy then, to see why NoViolet Bulawayo’s work would appeal to him. In We Need New Names she similarly seeks to shine a spotlight on a life lived on the margins of Americana.

Each chapter is like a short story that comes together to tell us the story of Darling, who is a ten year-old girl living in a shantytown in Zimbabwe when we meet her. Darling’s family lost everything in paramilitary raids during a government takeover, but she doesn’t remember much about that time. Now she and her friends, including pregnant Chipo, navigate their neighborhood with the typical exuberance of childhood. Eventually Darling makes her way to suburban America, where she struggles to fit in and wrestles with the consequences of assimilating to a culture that may always look at her as an outsider anyway.

Bulawayo has a vibrant way of channeling Darling’s worldview. Her affection for the character is palpable, even for her mistakes and her character flaws, which is something most authors struggle with. Darling is a fully realized, dimensional being. Again, it’s easy to see why Díaz blurbed this novel so enthusiastically. But for me, as good as Bulawayo is technically, I just couldn’t get swept away in We Need New Names the way I have in everything Díaz wrote.

What ends up making all the difference in the world is that Díaz’s ragtag inner city troop of single mothers, bad boys, hopeless nerds, and more are truly original–which makes his work feel revelatory, dangerous, and urgent. In comparison, it feels like I’ve read the story Bulawayo is telling before. I’ve read books about growing up and being an adult in politically unstable, impoverished Africa. I’ve read immigration stories. And there are authors who have made entire careers out of writing books about cultural displacement and the difficulties of leaving one’s home country behind (Jhumpa Lahiri comes immediately to mind). That doesn’t discount this book at all, mind you. Not necessarily, at least. But it does make it harder for Bulawayo to build that sense of urgency or relevance, and to my mind she spends the entire novel only making it to the cusp of those qualities, which she really needed in order to succeed.

Maybe the almost-short story format is to blame. Because just as we’re diving into something, we’re onto the next topic before we’ve adequately resolved what just happened. Okay, in most circumstances there isn’t proper resolution to be had, but in most cases the moment hasn’t landed before we’re onto the next thing. There are exceptions where the chapter’s subject matter is horrific enough to make you shift uncomfortably in your seat as you turn the pages, but in most cases it feels like we’re only skimming the surface. For example, in one chapter early on Darling’s father turns up unexpectedly after being a gaping absence in her household for years following his departure to do a dangerous job abroad. Instead of being overjoyed at having her father home again, Darling is repulsed because he is dying of AIDS. When Darling’s friends find out her father is sick and demand to see him, they talk to him and take care of him–showing him the courtesy, love, and humanity Darling herself had been denying him. Just when you think we’re on the brink of an emotional breakthrough, the chapter ends and Darling’s father is barely mentioned again for the rest of the book. Bulawayo took us right to the edge of a poignant moment, then for some reason ran from it and refused to revisit it. It seems like a curious omission. I spent the rest of the book wondering what happened to Darling’s father and why it was never mentioned. If he died and it was of such little consequence to Darling that it never came up again during her adolescence, then why would his return home and that moment where Darling’s friends showed him compassion have been worth showing us at all?

That’s just one example. Bulawayo has a way of almost parenthetically discussing a lot of the heavier moments in We Need New Names, and while I suppose one could admire her restraint from devolving into theatrics, it did have a tendency to make me feel removed from the novel at every turn. I never got captivated or swept away. Which is a shame, because her technical prowess as a writer is undeniable. As is her skill with tone. As I said earlier, Bulawayo makes Darling come to vibrant life. I would still recommend We Need New Names, and I confess I am curious to see where Bulawayo’s talents take her next. She has the makings of a terrifically talented writer.