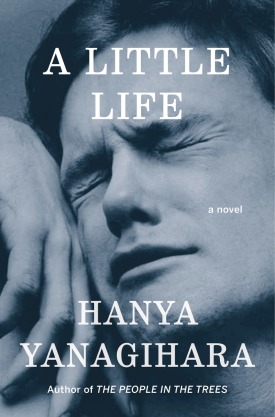 “…things get broken, and sometimes they get repaired, and in most cases, you realize that no matter what gets damaged, life rearranges itself to compensate for your loss, sometimes wonderfully.”

A Little Life is the story of four friends who meet in college. Ostensibly, it follows their friendship throughout the decades that follow, but the truth is two of those friends are peripheral for large swaths of the book. This is really the story of Willem and (especially) Jude. Willem is a sensitive young man from a broken home who wants to be an actor when we first meet him. Jude refuses to reveal his background to his friends, but they know whatever it was it was violent and dark. His legs are in splints that have been screwed into his bones as a result of a vague accident.

The book centers on Jude’s story, particularly on (1) how he came to be so injured, and (2) how he deals with, or refuses to deal with, his past as he ages. He mostly refuses to deal with it. Since Willem is his best, most trusted friend, he gets a much larger percentage of time than any other character.

In the beginning the other friends, Malcolm and JB, have more of a part. In those early stretches I was enjoying A Little Life, even if I thought some of the characters–particularly JB–were a touch insufferable. But as the pages go on and JB and Malcolm fade into the background, the narrative becomes stultifying. It becomes apparent very quickly that although he will age, Jude will never want to deal with what happened to him. He will keep running and exhibiting shockingly self destructive behavior. Those around him will meekly tell him to get help, but they won’t do anything to force him to get help. As someone who has dealt with abuse, depression, and helped others through tough spots in their own life, I found it infuriating. They’ll get mad and make threats about how Jude needs to get help, but he knows very well they won’t see the threats through. No one is really going to force him to do anything.

I really struggled with that. Because it’s real: that does happen. But it was making me so frustrated. I had to keep reminding myself that I can’t force my own experience or my own opinions on the book.

The bigger problem, more legitimate complaint I had with A Little Life is that it’s far too long. Yanagihara doesn’t get anywhere in a hurry. In many scenes it feels as though she’s deliberately taking her time, drawing out the moment to make it last. Sometimes it feels as though she’s taking her time to give you more, but to me the ‘more’ she was giving was never satisfying, never justified the extra pages. If you got into the character’s heads a little more, or if something in the elaborate details she was giving revealed something you hadn’t known or noticed before, I would love the sprawling, meandering form the narrative takes. Instead, nothing that is revealed is ever surprising–in fact, it tends to be Yanagihara stretching a point she’s already made. The further you get into the book the more it feels like you’ve already ingested everything she has to say, and yet it’s going to take so much more time to get to the conclusion. She’s basically just poking a bruise.

The far more confounding issue I had with A Little Life is that for all this detail and poking, I never once felt close to any of the characters. Everyone other than Jude and Willem is a cypher anyway, but I always felt distant from Jude and Willem as well. My relationship with them was so dispassionate that I found I could put the book down for several days and not even miss them. After a month of reading this book, I found I still had more than 200 pages to go. That felt so disheartening–not because I was desperate to finish, but because it filled me with dread that this book was never going to end, and I didn’t much care what happened anymore. I took it as a sign and put the book down. Out of curiosity, I did peek at the plot summary on Wikipedia, and it sounds as though the next 225 pages were just as insufferable about poking that bruise as the first 500. I don’t feel like I’m missing out on anything by not continuing Jude’s journey.

A Little Life is startlingly different from the experience I had reading her debut novel, The People in the Trees. The People in the Trees is a quarter as long as A Little Life, but I was compelled to keep reading it–savoring every page. It was also boundlessly creative and felt different. The characters in The People in the Trees were also difficult for me to relate to, but I was so invested in their story that I couldn’t bear to put the book down until I was finished. It felt like I had discovered a thrilling new voice in Yanagihara. Now I’m not sure what to think. I will still be curious to follow Yanagihara’s career, but not with the same impatience and sense of wonder I had before. It’s disappointing.