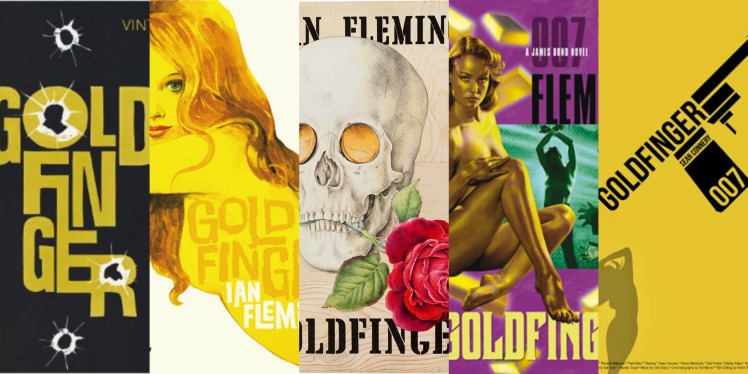 I suppose it was bound to happen sooner or later. Here we have it: the first Bond book by Ian Fleming that I actively disliked. Fleming churned one book out every year once he started writing about 007’s adventures in 1953 so it was really just a matter of time before he repurposed some of his set-ups and concocted a diabolical scheme that was far too complicated (and full of holes) for its own good. Plus, there are passages that are just plain offensive.

For starters, the plot relies far too heavily on coincidences. This isn’t the first time Bond unknowingly met the bad guy before he was supposed to investigate him–that already happened in Moonraker when M asked Bond to accompany him to his club to determine if Hugo Drax was cheating at cards (the very next day Bond was sent to investigate the murder of one of Drax’s employees). That time Fleming pulled it off. This time he doesn’t. You see, in the opening of Goldfinger Bond is on his way back to England, morosely pondering the implications of having a license to kill after a messy job in Mexico City. He runs into one of the men who was at the baccarat table with Bond in Casino Royale (coincidence #1), and when their flight is canceled (coincidence #2), the man invites Bond back to his hotel to help him determine if a guest there has been cheating him in cards (been there, done that). It just so happens that the cheater in question is Auric Goldfinger, the richest man in England. Bond helps foil the cheating scheme and gets Goldfinger to repay all of his winnings. When Bond gets back to MI6 he is assigned to investigate none other than Auric Goldfinger, who is suspected of smuggling stolen gold and using large amounts of it to fund SMERSH’s evil operations. Conveniently, Goldfinger had invited Bond to play golf with him to get revenge for busting up his card scheme (coincidence #3). All throughout the book, things are happening by coincidence. It’s lazy plotting from someone who usually knows better.

Then there’s that interminable golf game. Fleming has vividly described card games in these books before, but going into such detail about a golf game is just insufferable. It seems to drag on forever. He practically describes what happens on every hole along the course. It takes fifty pages! Golf is boring as it is without making someone read about it.

For some reason Fleming makes James Bond something of an incompetent agent in Goldfinger. It’s surprising. I mean he’s still a suave secret agent on top of everything, but he makes some maddeningly dumb mistakes along the way. Like when Goldfinger leaves him unattended in his home and Bond snoops all over the house even though he knew it was a trap and he would get busted. Or when Bond encounters Tilly Masterton while sneaking into Goldfinger’s Swiss hideout and doesn’t think the fact that the radar on top of the chimney is pointed at them is a big deal (naturally, it is. Moments later Oddjob takes them both prisoner because duh, the radar alerted everyone inside to their presence). I get that it makes Goldfinger a tougher villain if he can occasionally get the better of Bond, but in the other books Fleming managed to do it without making Bond do dumb things.

Goldfinger’s scheme, it should be noted, is simultaneously ridiculously overcomplicated and filled with holes. His plan to rob Fort Knox for billions involves layer after layer of ludicrous details–many of which don’t make sense at all. For instance bringing in the heads of several mob organizations–ostensibly to provide their man as back-up except that their presence seems utterly inconsequential other than to introduce Pussy Galore (who is barely even in the book). Or how Goldfinger inexplicably decides not to kill Bond and Tilly Masterton when he has the chance so they can act as his secretaries while he organizes everything for the heist. Um, what? Why would that even happen?

The final insult is that Goldfinger finally tips the scales beyond casual/accidental racism. Fleming said some mildly offensive things about black people and Asians in Live and Let Die and Doctor No, and he certainly made some misogynist assumptions about women. But in those instances you could almost shrug it off and note that Fleming was very much a product of the time. Here, however, it becomes too much. Bond compares all Koreans to apes and something less than human. Goldfinger gives Oddjob a cat to eat for dinner as a reward for good behavior. Jill Masterton is a frilly little sex object for Bond to play with while her sister Tilly, out for revenge after Goldfinger kills her sister, is treated like something of a shrew for not responding to Bond’s advances. Pussy Galore is a full-on lesbian in the book and Tilly is revealed to be as well when she finds Pussy attractive. That prompts Bond to make some offensive remarks about lesbians and ‘pansies’ being confused people. It’s not stuff you can shrug off.

I’ve enjoyed the Bond series so far and I will continue to read the installments, but it turns out Goldfinger is a dated chapter in 007’s adventures best left back in the Cold War where it belongs.

Want to know how the book compares to the film adaptation? Check it out here. For more of 007’s adventures check out my Bond page–which has movie recaps and best-ofs. Up next: For Your Eyes Only.

One thought on “Goldfinger, by Ian Fleming: Book Review”