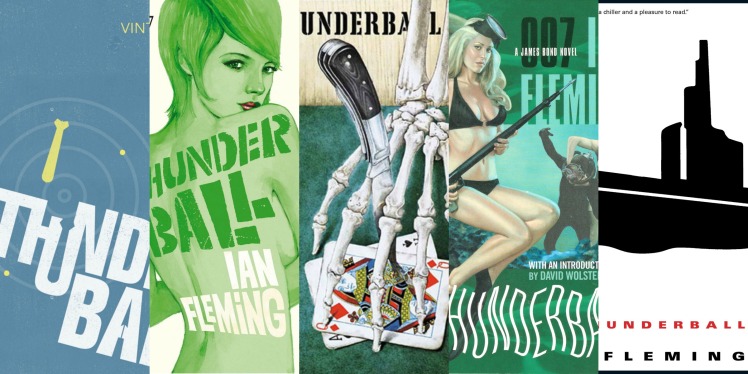 “It’s just that I’d rather die of drink than of thirst.”

SMERSH, the Soviet spy organization that was the main villain in the early Bond books, has died an alarmingly sudden, anticlimactic death. Based on an actual organization whose name was coined by Josef Stalin himself, SMERSH had been officially shuttered in 1946, long before Ian Fleming wrote the first James Bond book. Now in fiction as in life SMERSH has suffered the ignominious defeat of being quietly folded into the NKGB with little to no explanation. There’s a passing reference that it has been two years since SMERSH disappeared and that’s it. Given that Bond made SMERSH his sworn enemy in Casino Royale, it seems odd that they should disappear with such an utter lack of ceremony.

But don’t fear, Fleming has a plan to replace them. For Thunderball unleashes SPECTRE (the Special Executive for Counterintelligence, Terrorism, Revenge and Extortion), headed up by none other than Ernst Stavro Blofeld. This organization, and Blofeld in particular, will be far more familiar than SMERSH to the casual Bond enthusiast because they are the primary antagonists to 007 in the early Bond movies.

Thunderball also unleashed a host of legal troubles that plagued the Bond series for more than five decades. You see, Fleming was very motivated to sell his series to a film studio. He cleverly recognized the popular appeal Bond would have on screen. He prepared a screenplay for a Bond film with a man named Kevin McClory, in which James Bond must defuse a nuclear threat from a terrorist organization called SPECTRE. The script was surprisingly difficult to sell to a movie studio, so in frustration Fleming adapted the script to a novel. Problem is, he didn’t get approval from McClory to do that. It wasn’t such a big deal until the Bond series actually was sold to EON Productions. Thunderball was supposed to be the first Bond movie but McClory fought for his legal rights to the story and it was complicated enough that Dr. No launched the franchise instead. Conveniently, Fleming passed away not long after the film series got going, but the legal drama kept escalating and escalating over time. The movie series was even banned from using SPECTRE and Blofeld anymore after 1971’s Diamonds Are Forever (both eventually returned to the series in 2015’s Spectre). There was a competing Bond film in 1983. It was a mess.

Anyway, for something that caused so much drama Thunderball is one of the best of the best when it comes to both the book and the movie adaptation. It starts with one of those terrible coincidences where Bond finds himself in the right place at the right time to unknowingly get a preview of the villainous plot as it gets underway, but in this case Fleming pulls it off–but only barely. That whole sequence, in which 007 is sent to a health clinic near Brighton and runs afoul of a mysterious agent from the Chinese Tong gang, getting caught in an escalating series of deadly one-upmanship, is frankly ridiculous. It also just so happens that this gang member is integral to the launch of SPECTRE’s evil plot, so without even knowing it 007 is at ground zero.

That plot is to steal two nuclear warheads and hold the world hostage, threatening to attack either the US or England with the devices if payment is not sent. The entire service goes into frantic disarray to track down where the warheads are being kept in order to prevent disaster. M, however, has a hunch, and he gets permission to send 007 to investigate it with a liaison from the CIA. Conveniently, Felix Leiter has been brought back to assist his former employer (he had been dismissed after a run-in with a shark left him maimed in Live and Let Die), and since this hunch of M’s seems like a longshot Leiter is sent to act on the CIA’s behalf. That gives Leiter and Bond a perfect opportunity to recapture their bromance as they have a look around the Bahamas.

The likeliest candidate for villainy in the Bahamas is Emilio Largo, a wealthy man allegedly on a treasure hunt with his fantastically named yacht, the Disco Volante (flying saucer in Italian). Bond and Leiter must act quickly to find out if Largo is their man, dodging danger right and left. There’s also the matter of Largo’s intoxicating mistress, Dominetta “Domino” Vitali, who could provide the key to their investigation and provide them with the ‘in’ they need to unravel the plan.

Domino also happens to be far and away the best Bond Girl in the book series so far. Fleming has a remarkably insensitive way of alternately sexualizing and infantilizing women. Even the ones who start out strong and independent end up just another sex object for 007 to play with. Domino is the only one who is her own woman, even when she sleeps with James Bond. She seduces him just as hard as he seduces her, after all. And when things begin to hit the fan she doesn’t wait for Bond to save the day, she takes action. I cannot tell you how refreshing that is.

Taking the opening sequence in the health clinic out of the equation, this is James Bond at his best. It’s a rollicking adventure with high stakes and indelible characters–even if it gets a little exposition-heavy in the beginning (did we really need such an elaborately boring backstory for Blofeld? He’s much better when he’s mysterious).

Want to know how the book compares to the film adaptation? Check it out here. For more of 007’s adventures check out my Bond page–which has movie recaps and best-ofs. Up next: The Spy Who Loved Me.