“It came, over and over, down to this: What made someone a mother? Was it biology alone, or was it love?”

In Little Fires Everywhere, Celeste Ng makes great use of the town she grew up in, Shaker Heights. A meticulously planned suburban sprawl, Shaker Heights becomes a sort of stand-in for the way life tends to get in the way of your best-laid plans.

Ng spends a lot of time spent putting the pieces on the chessboard, so to speak. At least half of the book is spent introducing the characters and letting you get to know them as Mia Warren, a restless photographer, arrives in Shaker Heights with her daughter, Pearl, and rents an apartment from Elena Richardson. The dustjacket describes Mrs. Richardson as the perfect embodiment of Shaker Heights (a live-by-the-rules woman obsessed with keeping up appearances), but this is only half true. She is most definitely obsessed with appearance and status, but despite her keen appetite for what she sees as justice, Mrs. Richardson is happy to bend the rules when it suits her. It’s just that she doesn’t want anyone else to bend the rules to disadvantage her.

The dustjacket also describes Mia as a woman with a disregard for rules that will upend the community, and this, once again, isn’t entirely true. Mia is relatively unstructured, but she does have respect for order. It’s just that she understands that life doesn’t follow neat little lines, so while Mrs. Richardson tries to bend the world to her will, Mia is able to embrace the chaos and react to other people without harshly judging them.

Mia and Pearl have been living a nomadic life, moving from town to town whenever the mood struck Mia. This time, however, she has promised Pearl to stay in place. While settling in Shaker Heights, their lives become entwined with the Richardsons–Pearl by spending all her free time hanging out with the Richardson kids in their spacious home, and Mia by accepting a position cleaning the Richardson’s house (at least partly to avoid losing touch with her daughter, who is quite taken with the Richardsons).

For a long time the plot meanders as if this is all there is, but once it gets going you appreciate the careful setup work. I still might argue that the first half could have been trimmed (there’s an embarrassing incident with a teacher and a bathroom that immediately leaps to mind). Things (finally) begin to come to a head when Mrs. Richardson’s best friend, Linda McCullough, adopts a Chinese baby who was found abandoned outside the firehouse one snowy night. The McCulloughs had been trying and failing to start a family for years, so Mrs. Richardson sees this as their fairytale ending. But when the birth mother surfaces, a custody battle ensues–with Mr. Richardson acting as the McCullough’s lawyer. Mia finds herself on the opposing side, however, since the birth mother, Bebe Chow, is a coworker of hers.

Mrs. Richardson had already begun investigating Mia’s mysterious past by this time–slightly jealous that her children find Mia’s casual nature appealing. But as the custody battle gets uglier, so do Mrs. Richardson’s plans for what to do with the information she’s found.

What follows is an investigation of several topics. First, the concepts of structure vs. disorder. Second, what makes a mother. Third, we have commentary on socioeconomic issues (one of the McCulloughs chief complaints against the baby’s birth mother is that she is poor, and therefore cannot financially provide for the baby the way they can. There is also a permanent divide between Pearl and the Richardson kids because no matter how much time she spends with them, she is not “one of them”). And finally, Ng gets at issues of cultural appropriation through the McCullough family’s adoption of a Chinese baby when neither one of them knows anything about the Chinese culture their baby comes from.

It feels clear that Ng uses Mia to get across her own feelings on the topics at hand, so we can assume that Mia’s approach is the one she herself believes (rigid structure can’t keep disorder at bay, all someone needs to be a true mother is love because things are tenuous–they can be lost or disposed of at will, and the baby’s connection to Bebe and their culture is strong enough that it should not be whitewashed away). But Ng humanizes all of her characters so no one comes out as a villain (this is, perhaps, where all that set-up work pays off). While it’s difficult to believe that Mrs. Richardson had much in common with Mia at one point in her life as Ng implies, it is certainly believable that she has closed a lot of doors she might otherwise have taken in order to pursue her vision of the perfect family. And Ng carefully lays out honest pros and cons for both the McCulloughs and Bebe during the custody battle so that no matter what the verdict is, you understand what is won and lost and have empathy for both sides.

But motherhood is the novel’s primary concern, and Ng does a great job getting at the complexity of the issue–how one’s status as a mother is slippery and subject to change, and how motherhood is as much a construct we have defined within our society as it is a primal instinct. Interestingly, both Mia and Mrs. Richardson have a daughter who gravitates to the other woman as a symbol of the mother they desire. Pearl inserts herself into the Richardson family because it is large and stable. It has routines and it doesn’t wander. And Mrs. Richardson’s daughter, Izzy, gravitates to Mia for the same reason: Mia offers Izzy what she cannot get from her home life: understanding, guidance, and compassion. 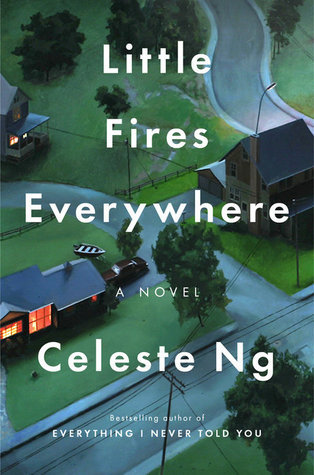