It’s been a while, but I’m finally back. In June, I did a comparison between the Rizzoli & Isles TV series and the Tess Gerritsen books that inspired it (you can check that out here), then a quick rundown of the first three books for good measure.

To recap, intrepid M.E. and “Queen of the Dead” Maura Isles felt stirrings of emotion for the most unattainable man possible, a handsome priest named Daniel Brophy. Hotheaded loner detective Jane Rizzoli, meanwhile, discovered that she is pregnant after a tryst with an equally hardheaded FBI agent named Gabriel Dean. After some deliberation, they decided to keep the baby and get married.

So what are we waiting for? Let’s do this. 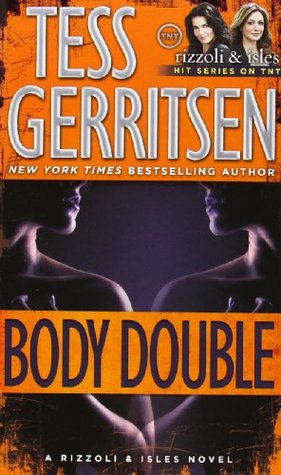 Maura returns from a business trip in Paris to find that her home is a crime scene and everyone acting like they saw a ghost the second she walked in the door. Turns out there’s a body in Maura’s driveway. A body that looks exactly like Maura.

During the course of the investigation, Maura learns that she had a twin sister who had been digging into their past in order to find Maura. Finding her sister’s killer may just put Maura in the crosshairs herself. Meanwhile, Rizzoli is eight months pregnant with FBI Agent Gabriel Dean’s baby and trying to reconcile her traditional status as a hard-headed loner with her new life as a wife and mother-to-be. It doesn’t help when she and Maura uncover a nation-wide baby-smuggling racket that doesn’t exactly keep the mothers alive when they’re done with them. Could the very pregnant Rizzoli be putting herself in danger, too?

Maura has always been an introspective character (almost painfully so), so it’s nice to see her off on a plotline that gives her cause to gaze at her own navel so fiercely. Discovering that her mother is a serious criminal as well as a mental case is something that she will have to struggle to come to terms with over the next few books, and it carries much more weight as a burden than the failed marriage that haunted her up to this point.

As for Jane, well, her plotline is half good. I love the conflict inherent to her pregnancy situation. As I said, she’s trying to reconcile her commitment to her job and her hardheadedness about letting anyone into her life with the reality of her situation. It’s a genuine conflict and Gerritsen handles it very well as a character-redefining moment. It’s what I like about the book series compared to the TV show: actual growth over time.

Where this one goes a little off the rails for me is that it gets too convenient when the baby smuggling comes up. Maura had already found herself in the crosshairs as she investigated her past, so I guess Gerritsen felt like the stakes needed to be raised for Jane as well. She ultimately makes a great point about the fierceness of maternal instincts, but to me it’s a plotpoint that feels a little ham-handed. The baby-in-potential danger theme will be handled much more organically in the next installment.

Everybody’s day starts off on the wrong foot when Maura gets the shock of her life as an anonymous body she is about to autopsy turns out to be very much alive. Things get worse after the Jane Doe is rushed to the hospital, only to take pregnant-to-bursting Jane Rizzoli and several other people hostage. While Jane struggles to defuse the situation and stay alive, Maura must team up with FBI agent Gabriel Dean to find out who this mysterious woman is–and what deadly situation drove her to this desperate moment.

Just like in Body Double, Gerritsen plays the pregnancy-in-peril card, but this time it feels less forced and the stakes are higher. It’s no great secret to the reader what Jane Doe’s story is, since we have access to flashbacks and some narration from her, but Gerritsen makes her fear and determination palpable enough for you to feel invested in her as well as our regular protagonists.

One of Gerritsen’s strengths is that she is exceptionally good at writing strong women, and Vanish is a sterling example of this talent at work. In a male-dominated genre, it really is a breath of fresh air. I cannot state that enough. Women in mystery-thrillers are all too often undermined in favor of their male counterparts–most often by making them sleep with every hardboiled man they run into. Gerritsen is guilty of this at times, too (think of the awkward love triangle between Rizzoli, Catherine Cordell, and Thomas Moore in The Surgeon; or the way Rizzoli ended up in bed with Gabriel Dean in The Apprentice), but for the most part she is able to use these incidents to deepen her characters as realistic, flawed human beings who face real consequences for their actions. The only character on the same level is probably Kinsey Millhone, of Sue Grafton’s alphabet series.

Vanish stands out in this series as a compelling read that also celebrates the strong women driving the plot forward.

This is the first installment of the Rizzoli & Isles series that I just couldn’t get into. It starts out promisingly enough, as much as you can use that term when it starts out with a woman’s brutal murder and the word “peccavi” scrawled on the wall in blood (it turns out to be Latin for “I have sinned”).

Maura has the spotlight in this adventure, as the investigation quickly focuses on the titular organization–a mysterious, ancient club with elite, highly educated members and curious ties to evil. It’s basically Mensa for Agatha Christie fans, and dear Dr. Isles seems to fit right in–even though she isn’t sure the Mephisto Club is on the up and up. As the body count rises, Maura finds herself getting drawn into the heart of the Mephisto Club, and perhaps facing down evil incarnate.

I think the reason I don’t respond to this installment very much is that it tries to bring a mystical interpretation of evil into the mix, and I’m not sure it has any place here. Just like how the Dexter books jumped the shark a bit when they tried to explain Dexter’s Dark Passenger as a mystical demon that had attached itself to our protagonist, it feels off to have Maura grappling with metaphysical dark forces. Yes, it could be interesting to have the scientific Maura forced to think about a more faith-based interpretation of good and evil, but let’s face it: Mulder and Scully already trod this ground, and they did it very well.

Still, if you’re dedicated to the series this is one you’ll have to be familiar with because it introduces a character who will continue to intrigue Maura in books to come.

For more, remember to check out my TV vs Book series post on Rizzoli & Isles, and of course part 1 of the book series rundown. Then come back for more with part 3.