Fasten your seatbelts, everyone. This is where things really start to get interesting in the Bond series, and not just because 007 wears a terry cloth onesie.

More camp. More action. More gadgets. More elaborate deaths. This is the birth of Bond as we know him. There’s camp. There’s action. There’s drama. There’s Sean Connery in a teeny tiny bathing suit (turns out that mini-blue number Daniel Craig wore in Casino Royale was an homage. Who knew?!). The camp factor Goldfinger introduces would nearly consume the franchise in the future, but for now there’s a decent blend of action balancing things out.

And boy was it successful: Goldfinger was in the Guinness Book of World Records as the fastest grossing film of all time and it broke box office records in multiple countries. This is the moment Bond became a phenomenon. I guess the strategy of releasing three movies in three years paid off.

Have your favorite henchman make you a beverage and let’s bask in the warm, golden glow, shall we?

After a jaunt to Latin America, Bond is stopped in Miami to observe Auric Goldfinger. Goldfinger has been smuggling gold and it’s up to 007 to uncover how the dastardly millionaire is doing it. Of course, things get more complicated when it turns out Goldfinger has a mysterious plot named “Operation Grand Slam” that has something to do with the gold in Fort Knox. At first Bond assumes Goldfinger is planning to steal it, but it turns out Goldfinger knows he could never get away with all that gold, so instead he plans to detonate an atomic device in Fort Knox–radiating the gold and rendering it useless for about 60 years, making Goldfinger’s holdings the most valuable in the world. It’s basically a heist movie with a lot of unnecessary complications and detours.

Dr. No and From Russia With Love established the tone and template all Bond movies follow but Goldfinger establishes its excesses. For instance, Goldfinger is the first Bond movie to feature multiple settings. When it’s on, it’s on fire–Goldfinger has many of the most iconic features in the series–but the movie is undermined by a lot of moments that don’t land at all. The whole subplot with the gangsters Goldfinger has invited to his lair, for example, is tedious and makes no sense (why invite them in on his scheme when he only planned to kill them?) Many call Goldfinger the best Bond movie, perhaps blinded by the good parts, but for me it barely cracks the top 10. To me, all the sparkle Goldfinger throws off can’t hide the blemishes.

007’s Aston Martin obsession takes flight when Q supplies him with his very first tricked out vehicle. There’s also a homing device that fits in the heel of Bond’s shoe. Goldfinger, meanwhile, has a deadly laser and a pool table that rotates pointlessly and helps him project his evil plan on the wall (it also hides poison gas canisters). This marks an escalation in gadgetry in which each film will try to come up with a spy tool more outlandish than the last. We’re still relatively in the realm of realism here, but things will get wacky quickly.

CIA agent Felix Leiter was a young man when we met him in Dr. No. Now played by Cec Linder, Leiter has suddenly become a middle-aged frump. In the books, Leiter is essentially the American version of 007, but here he’s nothing but a sidekick. He might as well be 007’s puppy.

Honey Ryder may be the ultimate Bond girl for most, but many would make a case for Honor Blackman’s Pussy Galore. And there’s a good case to be made, least of all because Blackman is the first Bond Girl who isn’t dubbed. And what a performance! She makes irritated sarcasm sexy. Seriously, Pussy Galore has no patience for your sass. Also, this is Bond Girl has her own Bond girls: the gorgeous ladies of Pussy Galore’s Flying Circus (incidentally, Pussy will not be the last Bond girl to have her own circus). Anyway, the parts where Ms. Galore has no time for 007’s silly flirting (in the source novel she’s a lesbian) are delicious. It has to be said, though: the scene where she and Bond sleep together is very rapey. No means no, dude. Pussy is also undermined by a sudden turn to the good side once she sleeps with 007. It’s as if his penis thrusts the evil out of her. Credit where it’s due: Honor Blackman makes PussyGalore more than just a name, but like many aspects of the series, she’s seriously compromised by the film’s end.

Pardon the pun, but there are Bond girls galore in this movie. In addition to Ms. Galore, Goldfinger has a Bond Girl with what has to be the most famous demise in the Bond canon. Shirley Eaton doesn’t have much screentime as Jill Masterson but she enters the echelons of Bond fame by exiting the plot in spectacular, gold-tinted fashion. If you look too closely, her character falls apart, though. Jill is helping Goldfinger cheat at cards, then when Bond sneaks into her hotel room she just hops into bed with him. I’m pretty sure she didn’t even know his name. In her defense, Sean Connery was wearing a terry cloth onesie. You know, as spies do. Then 007 gets knocked out, and when he wakes up Jill is dead on the bed and covered in gold paint. But wait! Jill’s sister also gets in on the action! Tania Mallet makes an equally brief appearance as Tilly Masterson, who shows up to avenge her sister’s death despite her clumsiness and ends up getting killed with a hat. You read that correctly. It was a sad Christmas for the Mastersons that year.

You have to ask? He is, after all, in the title of the movie. Auric Goldfinger is a douche. He isn’t an ice-cold psycho like Dr. No or Blofeld (who skips this movie), he’s a spoiled, petulant baby with the means to make his megalomaniacal dreams a reality. Imagine Veruca Salt crossed with Augustus Gloop from Charlie and the Chocolate Factory and you have it. I mean, this is a guy with all the money in the world and he cheats at card games. For fun. Douchebag. Even so, hot damn does this guy make a compelling baddie. Credit goes to Gert Fröbe, naturally, for bringing Goldfinger to glorious, ginger life. Like many people in the early Bond films, Fröbe was dubbed–but here it’s hard to give him demerits. For one thing, the dubbing is near-seamlessly integrated into Fröbe’s performance. For another, it’s really Fröbe’s mannerisms and expressions that sell the part so well. When it comes to Bond villains, Goldfinger is among the best.

I’m tired of mentioning how iconic all of the people in this movie are, so let’s just take it as a given that the deliciously menacing Oddjob is one of the best. Aside from the physical presence provided by professional wrestler Harold Sakata, this guy kills things with his hat. He’s amusing, yes, but this is a baddie who demands respect and fear. And he doesn’t say a single word during the course of the film (unless you count commanding grunts).

SHIRLEY BASSEY HAS LANDED! And she brings us a song with all the bombast, talent, and delicious camp appeal the Bond series deserves. Dame Bassey’s divatude can hurt mere mortals unprepared for its glory. I honestly think this song would not work at all without Shirley Bassey. She’s the magic, the secret ingredient the Bond music world was waiting for to realize its full potential. Without her we might still be listening to Sinatra rejects played in the background of love scenes. Not for Shirley. She demands nothing less than splashy opening credits with gold-painted dead ladies having images of 007’s adventures projected onto them. She is the only performer to sing more than one Bond song, and she’s done three. And when they celebrated Bond’s 50th anniversary at the Academy Awards, they naturally had Dame Bassey there to belt this one out just as well as she did nearly fifty years earlier. Amazing.

Bond blows up a drug lab in Latin America. Before catching his plane to Miami, he goes for a booty call with a belly dancer who was just trying to relax, take a bath, and rest her goddamned feet. While she’s distracting 007 with her kisses and toplessness, a goon sneaks up on Bond for the kill. Bond sees the man’s approach reflected in his traitorous booty call’s eye and uses her as a human shield for the blow. In the ensuing fight, Bond pushes the goon into the tub and electrocutes him with a space heater. Delivering a pun, 007 collects his coat and leaves. 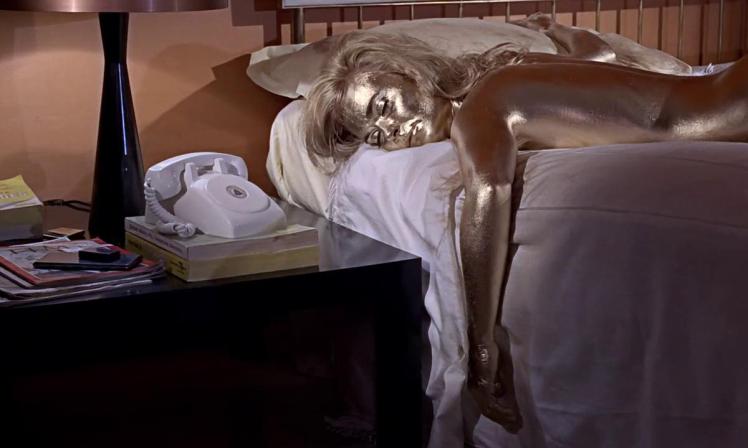 There are too many in this movie to pick just one. First up, there’s Jill Masterson’s death by gold paint. The official cause of death given is “skin suffocation,” which thankfully isn’t a real thing (especially for Shirley Eaton). It’s a pop cultural landmark in a series chock full of them. Next, a moment that earns icon status because it has been copied numerous times as an homage to Goldfinger. After Bond is captured investigating, Goldfinger has him strapped to a table and points a laser at him. The laser begins to slowly move up toward 007’s precious groin area, threatening to slice him in half, prompting Bond to desperately ask if Goldfinger expects him to talk, prompting Goldfinger to casually utter a comeback that has been echoing in pop culture ever since: “No, Mr. Bond, I expect you to die.”

Check out more 007 action, as well as ‘Best of’ and ‘Worst of’ lists, on my Bond Project page. Up next: Thunderball.