Behind the scenes turmoil on The Man With the Golden Gun led to the dissolution of the relationship between longtime Bond co-producers Albert R. Broccoli and Harry Saltzman once filming was complete. Legal wrangling between the two would delay the next 007 movie (The Spy Who Loved Me). And as if that wasn’t enough, The Man With the Golden Gun was met with mixed reviews from critics and audiences–and although it turned a profit, it failed to light up the box office the way previous Bond movies did. It has the fourth lowest box office of any Bond film. As years have gone by, people frequently reference two of the movies features (the villain and the henchman) while ignoring the rest.

So. Does The Man With the Golden Gun deserve its middling reputation? Let’s go to the tape. 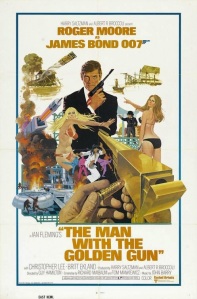 M and Bond are alarmed when a golden bullet engraved with “007” arrives at their London office–the calling card of Scaramanga, one of the world’s deadliest assassins. He is announcing his intention to kill 007. No one knows what Scaramanga looks like other than the fact that he has a superfluous nipple. He is anonymous, deadly, and surfaces only to strike with his golden gun, then recedes into the shadows.

M puts 007 on leave to track Scaramanga down. James finds Scaramanga’s mistress, who picks up and delivers his golden bullets when he is getting ready for a kill. But it turns out Scaramanga isn’t after 007 at all. It was a ruse perpetrated by the mistress, who believes that Bond is the only man capable of killing Scaramanga–a man she desperately wants to get away from but knows she can never leave.

That’s when things start getting unnecessarily complicated. A criminal overlord named Hai Fat (get it?) hired Scaramanga to steal a plot device called a Solex Agitator that has incredible powers to harness the sun’s rays and blah blah blah. Hai Fat sends an army of surprisingly ineffective ninjas after 007, who defeats them all (and let’s not forget how Bond defeats a Sumo wrestler by giving him a wedgie. No, really). Scaramanga double crosses Hai Fat to take over his criminal empire (quite out of character for a lone wolf who likes to stay low profile, no?), kidnaps Bond’s assistant, and makes off for his island lair with the Solex whatsit. Once there, we get our climactic duel between 007 and Scaramanga, but now we also have to suffer through a whole lot of solar plexus exposition and cataclysmic explosions as 007 fights to save the world.

The first quarter of The Man With the Golden Gun is a solid cat and mouse game with thrills and betrayals. It would have been refreshing to get away from the typical 007 mold where every villain must be a supervillain and nothing less than the fate of the world must hang in the balance in the climax. The Man With the Golden Gun could have been a battle of wits leading to a grand duel between two men who are deadly with their chosen weapons.

Except that it had to go and get complicated. That thrilling game of cat and mouse is undermined by doomsday theatrics, ninja nonsense, and lazy plotting. 007 does get back to the cold personality the source novels portrayed (and which Sean Connery was very successful at playing)–but Roger Moore intensely disliked the move toward a less funny Bond. And dear God, we have the return of the truly awful Sheriff Pepper from Live and Let Die. Whoever decided to write that character into this movie even though it makes absolutely no sense to do so deserves to be exiled to a cave to think about their crimes.

Does The Man With the Golden Gun deserve its middling reputation? Yes. It could have been one of the best Bond films, but its flaws are gigantic. Some of its features are the worst of the worst. That’s a lot to overcome.

007 is light on gadgets in this film, but Scaramanga does have a car that can be converted into an airplane. Not to mention that Scaramanga’s golden gun is put together from a cigarette case, lighter, and pen. James got out-gadgeted! 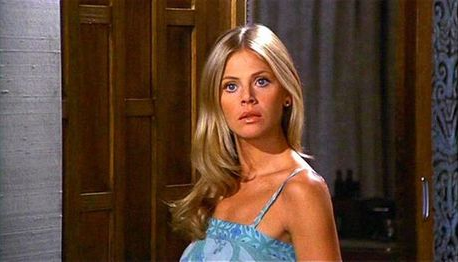 Mary Goodnight (played by Britt Eklund) has been stationed in Hong Kong and is very sexually frustrated. She can’t quite understand why 007 hasn’t been sleeping with her right and left. Perhaps the fact that she’s a TERRIBLE agent has something to do with it. From the moment she arrives on the scene she starts screwing things up. I suppose she’s supposed to be comic relief, but it’s just mind-blowingly annoying. Even Bond is clearly irritated by her incompetence. And why not? This woman almost kills James by not only causing the island lair to explode, but by almost hitting him with solar-powered lasers. Twice. Because she activated the machine with her butt. Yes, you read that correctly. Let’s face it: she’s a ditz, and a ditz has no place in a Bond film. The best you could say about her is that she looks good in a bikini. Spoiler alert: when I start making my list of the best and worst Bond Girls, it’s going to be a very tight race to the bottom for Mary Goodnight and Christmas Jones (of The World is Not Enough). 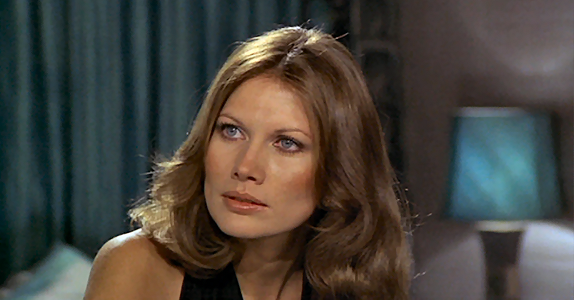 This Bond Girl is infinitely more interesting than the lead. Maud Adams plays Andrea Anders, Scaramanga’s conflicted mistress who tricks 007 into thinking that Scaramanga is trying to kill him to set them on a collision course. Andrea Anders is a tragic Bond Girl: caught up in a dangerous situation, clinging James Bond as her only way out. Severine in Skyfall is another example. It doesn’t go well for the Tragic Bond Girl, which is probably why she’s almost always in the supporting role. So it is for Andrea Anders. It’s a shame really, because she has a great deal more dramatic heft than Mary Goodnight. And such incredible cheekbones! No wonder Maud Adams became the first (and so far only) two-time Bond Girl. She returns to play the titular Bond Girl in Octopussy.

Scaramanga is frequently near the top of the list when it comes to the best Bond villains. And why not? Yes, he gets caught up in an incongruous all-powerful weapon subplot, but Scaramanga is a badass. In the source novel Scaramanga is a thug, but for the film they made him an international (and highly paid) assassin–a smart change because it elevates Scaramanga to Bond’s level. It makes him more dangerous because he’s a genuine threat to 007. And Christopher Lee–who had been in talks for the part of Dr. No ten years earlier–proves why he’s famous for playing villains. He imbues Sacaramanga with a fierce intelligence, a deadly set of skills, and a manic glee for what he does. The way Scaramanga genuinely seems to enjoy what he does for a living is part of what makes him so memorable. The other thing that makes him memorable is, of course, the third nipple. 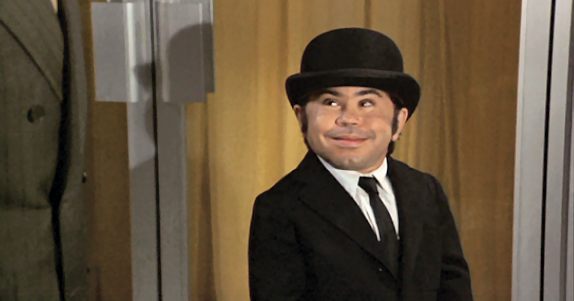 A memorable villain should have a memorable henchman, and Scaramanga has his in Nick Nack (Herve Villechaise). Oddly enough, Nick Nack is like a shorter, more talkative version of Oddjob from Goldfinger. They even dress the same. And while there are definitely short jokes, Nick Nack is allowed to be as ruthless and insane as the man he serves–but with just enough of a wildcard energy so as to make it seem as though he is toying with Scaramanga, too. It’s a fascinating dynamic–which is not something you can typically say of the villain/henchman relationships in the Bond movies. They are much more often very one-sided affairs.

I can sum up “The Man With the Golden Gun” (performed by Lulu) in two words: shit show. What the hell is this? Holy hell, the lyrics. Someone actually wrote this?? I don’t believe it. They would have been better served just pointing to words in the dictionary at random, then stringing them together. The rhyming alone is tortured. Don’t believe me? Let’s take a look at a sample, shall we? “Love is required, whenever he’s hired, it comes just before the kill. No one can catch him, no hit man can match him, for his million dollar skill.”

DREADFUL. But let’s have a moment for Lulu. Bless her poor little heart, she really commits to this crap. Girl sings her heart out.

Nick Nack stages a duel between Scaramanga and a gangster. Scaramanga defeats the gangster, then shoots up a very realistic mannequin designed to look like 007.

Let’s give it up for the climactic duel between 007 and Scaramanga on his island lair, but with the provision that we pretend none of that solex agitator silliness happens after the fight is over.

You can find links to all the Bond movie reviews as well as ‘Best of’ and ‘Worst of’ lists on my Bond Project page. Up next: The Spy Who Loved Me.