007 enters the 1980s in a rather curious way: with some tips of the hat to the early days of the series. Part of this was a desire to return to the style of earlier Bond films after the camp extravaganza that was Moonraker. But the form this hat-tip takes is more of a direct response to behind-the-scenes tensions. You may recall that the character of Blofeld had to be abandoned after Diamonds Are Forever because of legal battles over rights to the character. By 1981 those battles were getting ugly and the man behind those lawsuits, Kevin McClory, was getting ready to release his own James Bond movie (the unofficial Never Say Never Again). In a not-so-subtle ‘screw you,’ producers had 007 visit the grave of Teresa di Vicenzo in the opening scene, followed by a tussle with a bald man with a white fluffy cat in his lap. The Blofeld stand-in is quickly and unceremoniously dumped out of a helicopter, and James Bond is ready to leave his past behind, having proven that he doesn’t need Blofeld to have incredible adventures as the opening credits roll. 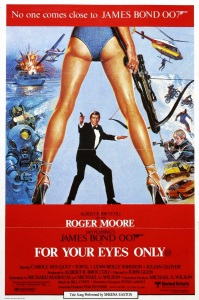 Producers sought to tell a grittier story than the over-the-top theatrics audiences were becoming accustomed to from 007. As such, we are treated to a plot that focuses on the themes of revenge and its consequences. And where better to begin a classic revenge story than in Greece?

Another one of those technical whatsits so common in the Bond series is lost at sea, and British intelligence hires Sir Timothy Havelock to locate it before it can fall into enemy hands. But before he can begin the search, Timothy and his wife are brutally murdered in front of their beautiful daughter, who swears revenge on the man responsible. Her journey will, naturally, force her to work with 007 to investigate a dangerous Greek criminal organization. It’s a twisty investigation, indeed, laden with betrayal. Bond uses an elite informant to get close to the Greek criminal investigation, only to discover that his ally may be the man responsible, and his suspect may be innocent after all.

The opening scene, it must be said, is silly. The nod to Tracy is nice, and producers may have felt satisfied with their “screw-you” Blofeld shenanigans, but considering they were supposedly aiming for realism … well let’s just call it a gigantic miss. Action-packed but inherently silly chase scenes involving sports from the winter Olympics (such as skiing, bobsled, biathlon, hockey, and ice skating) only add to this problem. The music is also incredibly cheesy. I mean late-disco, early-80s awful.

And yet … there’s something appealing about this movie. It just can’t help but be silly, but at least it has good intentions. And the excesses of For Your Eyes Only are infinitely more attractive than the unmitigated camp Moonraker thrust upon the world. It helps that lead actors Roger Moore, Topol, Julian Glover, and Carole Bouquet create a balance between the dramatic and the comedic. Bouquet and Glover trend toward the dramatic. Moore and Topol mostly take things seriously, but their wry sense of bemusement considerably lightens the mood. Yes, it’s a flawed movie. But it’s a movie that can’t contain its fondness for those flaws. And that makes it endearing. It can’t be considered one of the best Bond movies, but it definitely heads up the middle of the pack.

It helps that the film’s conclusion, in which 007 and Melina are dragged by rope through a shark-infested coral reef, is one of the most thrilling of all Bond’s overly-elaborate near-death experiences. Fun fact: the novel Live and Let Die actually ends with this sequence, but producers had to scrap it from that movie, repurposing it here because it was too good to pass up.

By the way, the movie poster is so audaciously, ludicrously sexualized that you almost have to admire it. 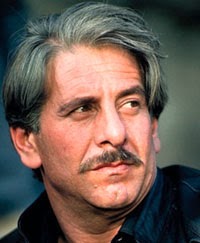 Notable Moments: Bernard Lee tried to film scenes as M, but was too ill fighting stomach cancer. He had to drop out of the film and producers refused to recast the part out of respect to the man who had portrayed M for the first 11 Bond films–making this the only Bond movie in which M does not appear. His absence is explained by having M on leave. Lee passed away during filming and the part was recast for the next film, Octopussy.

Gadgets: Producers vacillate between overly elaborate gadgets and spurning the idea completely, and following Moonraker producers moved away from gadgets. The only one Bond uses is the Identigraph, a computer system that can piece together a face from a description and locate the corresponding identity. We get a glimpse of numerous other gadgets in the works at Q Branch, because as discussed the filmmakers just can’t help indulging some of their sillier instincts, but none of them are featured in the plot.

Ally: First it looks like Aris Kristatos is 007’s ally and Milos Columbo is his foe, but it turns out to be the opposite. Following the film’s slight hints at Greek tragedy, Kristatos and Columbo were once like brothers, but greed and a lust for power corrupted Kristatos. He has successfully tricked the British and Greek governments into trusting him, and the only person who can reveal him is Columbo (really? The only person, you ask? Just go with it). So Kristatos frames Columbo. But Columbo is able to reveal the truth to James Bond, and the two work together to take down his former colleague. Topol comes from the Telly Savalas school of acting: the man just has charisma. He practically seems to be winking at the audience and having a blast at the same time, munching on a handful of pistachios with an amused gleam in his eye. But he sells the revenge storyline as well, as only Tevye can. 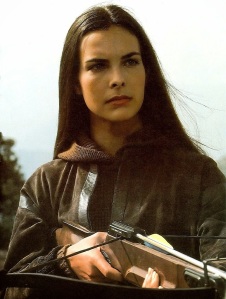 Bond Girl: The only real problem with Carole Bouquet as Melina Havelock is the infuriating decision to dub her so badly. Yes, Bouquet is a French actress playing an Englishwoman, but no one seems to mind the people who are clearly British playing Greeks. Why get fussy? Or why not just make the character French? Her father was supposed to be modeled on Jacques Cousteau, after all. Some Bond Girls had to be dubbed because they couldn’t speak English well enough to be understood (Kissy Suzuki, for one). But in the deleted scenes it is apparent that Bouquet’s English is just fine. It would have only taken minor modifications to her character’s background to explain the French accent. Hell, she could have gone to a French boarding school. I know, I’m taking this a little too personally, but you have to understand that Carole Bouquet as Melina Havelock is an awesome Bond Girl … except for the awful dubbing. Bouquet gives a quiet, smoldering performance as the daughter out for revenge, and she is undermined by a voice that seems to be trying to add oomph where it doesn’t belong. There’s a bigger inflection that doesn’t belong there–it doesn’t suit Bouquet’s expressions or the way her lips move. Director John Glen should have trusted her performance instead of trying to build on it.

Anyway, Havelock reins as the strongest Bond Girl until Wai Lin in Tomorrow Never Dies. She’s serious, not frivolous. She lacks the cloying vulnerability that undermines so many Bond Girls–even Anya Amasova, who was supposed to be the Russian, female version of 007. She’s lethal with a crossbow. Her intense beauty isn’t even remarked on–she’s the first woman James Bond takes seriously. Even Tracy, the woman he married, slept with him the same day she met him. Melina’s love scene with James Bond is practically an afterthought, only taking place once the action is complete (so to speak). She’s the real deal, and unfortunately rare in the Bond universe. 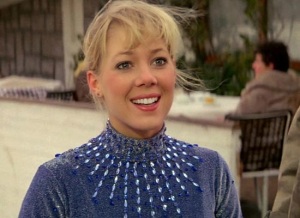 … which makes the Supporting Bond Girls a big disappointment. First, there’s the Lolita of the 007 series, Bibi Dahl (see what they did there?). She’s supposed to be an overly sexualized teen ice skating star Kristatos is keeping under his wing in an attempt to woo her (gross). She lusts after an older biathlete (gross) and makes several desperate attempts to get James Bond in bed (gross). It’s worth noting that Roger Moore was 54 the year this movie was released. Lynn-Holly Johnson was 23 but playing 16. It’s just weird. Even weirder is the realization that Carole Bouquet is only a year older than Johnson. Regardless, Bibi Dahl is just an unsettling character.

On the other side of the spectrum, Countess Lisl von Schlaff is slightly more age appropriate, but she’s treated as inconsequentially as supporting Bond Girls come. She’s really only there to help 007 get close to his nemesis, flash some shadowy nipple, and die in spectacular fashion (and, in this case, spectacularly brutal fashion). Cassandra Harris doesn’t make much of an impression beyond that shadowy nipple, but to be fair she doesn’t really have any opportunity. And it has to be said: it looks like the camera lens was smeared with vaseline every time she’s on screen 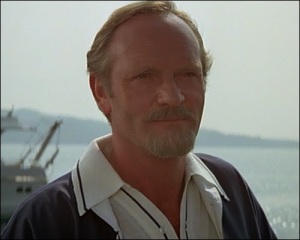 Villain: Slippery, suave Aristotle Kristatos has been playing the British and Greek governments for fools–tricking them into awarding him for his service while betraying them to the Russians all along. Settled into his well-played role, now Kristatos is eager to tie up loose ends–which means eliminating and discrediting the person he believes is the only man who can unmask him: Milos Columbo. Of course, it’s only a matter of time before James Bond finds out what Kristatos’ real intentions are. The dynamic between Kristatos and Columbo is underplayed in favor of 007, which is a shame, but it helps that Topol and Julian Glover embody their roles so well. Glover is smooth, debonair, and wicked (once his mask is finally lifted). It’s not really much of a surprise that he was considered for the role of James Bond at one time.

Henchman: First there’s Locque, who doesn’t speak a single word in the style of Oddjob–but doesn’t make a fraction of the impression. Locque is essentially a figure of menace standing in for the villain while you’re supposed to think that Kristatos is working with British intelligence. As soon as the reveal is done, so is Locque–literally tossed out in favor of Erich Kriegler, a biathlete and KGB operative who somehow manages to be a celebrated athlete even though he keeps sneaking away from his races to try to kill 007. Like Locque, he’s relatively dull and doesn’t leave much of an impression–except when he wears seriously skimpy shorts aboard Kristatos’ boat.

Theme Song: And lo! Sheena Easton‘s “For Your Eyes Only” was thrust upon the world, and Easy Listening stations everywhere rejoiced. It’s not a bad song, but it’s imminently forgettable. Sheena gives it her all, bless her heart–it’s not her fault the song is lackluster. Fun fact: she’s the only singer of a Bond song to appear in the opening credits. Guess it pays to be talented and hot. Now, strut, Ms. Sheena. Strut, pout, put it out. That’s the Sheena we really love and want to see.

On a side note, Sheena Easton aside, the opening credit sequences are officially in a rut at this point. The whole “naked ladies twirling in silhouette while a fully-clothed 007 points a gun” thing is beyond old.

Iconic Moment: The ski chase is well executed, but the plethora of ski chases (particularly during the Roger Moore years) makes it feel same same. The truly eventful moment in this movie is when 007 and Melina Havelock nearly become shark-bait as Kristatos drags them behind his boat.

You can find links to all the Bond movie reviews as well as ‘Best of’ and ‘Worst of’ lists on my Bond Project page. Up next: Octopussy.