What happens when a Bond movie isn’t officially a Bond movie? Never Say Never Again. That is to say, nothing good.

Back before there even was a series of Bond movies, Ian Fleming was trying to sell his spy novels for film. He enlisted the help of Kevin McClory to help him write a screenplay based on 007, and when the efforts appeared to have been wasted, Fleming adapted the screenplay they had created into the next novel in his Bond series, Thunderball. Trouble began when film rights were actually sold to Eon Productions. They originally wanted Thunderball to be the first movie to feature James Bond, but when it became clear that there was a rights issue with McClory, they went with Dr. No instead. They thought they had worked things out when Thunderball became the fourth Bond film, but legal problems continued.

Over the years McClory successfully argued that he also had creative stake in the character of Blofeld and Blofeld’s criminal organization, SPECTRE. So the Bond films had to abandon the character completely after Diamonds Are Forever in 1971. Eventually, McClory was granted an unusual prize by a judge: he could make his own Bond film to compete with the Eon Productions, provided that his Bond film was based on Thunderball.

And so, the great Bond battle of 1983 came about, pitting original James Bond, Sean Connery, in a rival film against 007’s current iteration, Roger Moore. In the end, Moore’s film, Octopussy won the box office. And while Octopussy is a strictly middling entry in the official series, it’s a better movie than Never Say Never Again. Let’s take a look at the ways.

Let’s face it, the people responsible for Never Say Never Again should ultimately be thankful that this movie never gets ranked with other 007 movies because of its unofficial status. If it were allowed to be ranked, it would consistently pop up in the ‘worst of’ category.

Remember Thunderball? This movie is that movie, with some slight variations (which makes sense, given that McClory was legally required to stick to that criteria). But they don’t do anything interesting with the Thunderball story or add any unique twists. And really, if you’ve already seen it, do you need to see it again? For what? For the inclusion of a weird video game sequence that’s supposed to be like a fight? You could do better. You could do worse, but you’d have to try.

Furthermore, given that McClory and his people really only had one shot at this, you’d think they would try to take advantage of it. They went so far as to cast Max Von Sydow as Blofeld, but then don’t use him at all. He and 007 never come face to face. Granted, that’s how it is in the source material, but they had access to a character the Eon films were unable to use, and they make him window dressing. 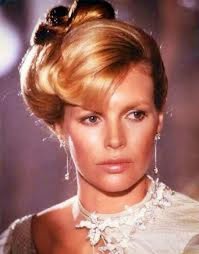 The less said about the movie itself, the better. Sean Connery was actually three years younger than Roger Moore when these competing Bond films were filmed, but for some reason he comes across as so much older. Perhaps the script shouldn’t have basically asserted that 007 was out of shape and on the verge of retirement–it only served to exaggerate the sense that this Bond is past his prime.

Bond Girl: Future Academy Award-winner Kim Basinger plays Domino Petachi, a retread of Claudine Auger’s Domino in Thunderball–but this time she dances! Like the rest of Never Say Never Again, Basinger pales when compared to the original. She’s beautiful but deadly dull. And while the original Domino had a memorable twist when she went for revenge against the bad guy for killing her brother, somehow it just feels rote here. But keep your chin up, Kimmy. In fifteen years you’d win an Oscar for Best Supporting Actress. If you were an official Bond Girl, you’d be the only one to go on to win an Oscar (Halle Berry being the only one to already have an Oscar when she appeared in a Bond film).

Supporting Bond Girl/Henchman: The only bright spot in the movie is the ridiculous, ludicrous levels of camp Barbara Carrera threw into the role of Fatima Blush. She’s Thunderball‘s Fiona Volpe but even more unhinged, with a wardrobe that would make Joan Collins, well, blush. This is actually fitting because Carrera acts every scene like she’s Joan Collins in a pool laying a slap-down on that bitch Crystal Carrington. Carrera claims she turned down the role of Octopussy to star opposite the original Bond, Sean Connery, here. If that’s true, she made a poor choice, but it worked out for the viewer because this portrayal of Octopussy would never have worked. It would have been a completely different film. And Carrera got a Golden Globe nomination for this! The world is weird sometimes. I guess you have to respect a woman who goes full-on drag queen when she gets her big break.

Villain: This time it’s not Emilio Largo, it’s Maximilian Largo in order to accomodate the very not-Italian Klaus Maria Brandauer. Brandauer is fine. He’s weird. But that’s about all you can say about him. You remember Emilio Largo and his eyepatch. Max is just forgettable.

Theme Song: Let’s just agree to pretend that Lani Hall‘s utter shit show of a song, “Never Say Never Again” never happened, shall we? It’s that awful. If it were an official Bond song, it would be the absolute worst. By far.

You can find links to all the Bond movie reviews as well as ‘Best of’ and ‘Worst of’ lists on my Bond Project page. Up next: A View to a Kill.