With the Battle of the Bonds behind him, Roger Moore returned for one last time to portray James Bond, a role he had dominated for twelve years. The end of an era. At 58 years old he was still spry and mischievous enough to carry off the part, but still, it was undeniably time for him to move on.

It is perhaps only fitting that Moore’s final go-round as James Bond is one of the campiest entries in the entire series. Camp was, after all, Roger Moore’s specialty whenever he donned the 007 tuxedo. He never really liked the serious subject matter. Whether or not you like him in the role really depends on how you like your 007: ruthless and cunning or quippy and amused. If you like the former, check out a Sean Connery or Daniel Craig Bond movie. If the latter, Roger Moore is your man (and perhaps, if you can stomach it, one of Pierce Brosnan’s later efforts).

To date, Roger Moore has raked up the most performances as James Bond with seven. That will be a hard number to top. So, is A View to a Kill a fitting send-off for the Bondiest of 007 actors? 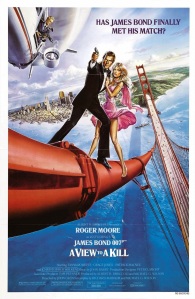 By all rights, this movie should be a disaster of Moonraker proportions. The camp levels are biohazard high. Showgirls high, almost. I mean, the villains are played by none other than schlockmeisters Christopher Walken and Grace Jones (in a shameless attempt to appeal to the MTV generation). And they actually say things to each other like “Wow! What a view.” “To a kill!!” THAT SHOULD NEVER WORK. Fun fact: producers initially wanted David Bowie instead of Walken, but he turned them down.

In the pre-title sequence, 007 unearths a microchip from the dead 009’s body in Siberia, snowboards his way to safety while the Beach Boys blast across the soundtrack, then beds a comely assistant in a submarine disguised as an ice floe. Are you seeing what I mean about the camp levels being dangerous?

The microchip, stolen from the KGB, is a perfect match for a prototype Q had commissioned from Zorin Industries, a vast conglomerate run by super-wealthy playboy Max Zorin. Given the similarities, it would appear that Zorin has been double-timing British Intelligence by handing his technology to the Russians as well. 007 is sent to investigate. Of course, it just so happens that Zorin is having a big party for horse race enthusiasts, which leads to a whole lot of shenanigans as 007 investigates, is discovered, and escapes. It doesn’t take long for Bond to discover that Zorin plans to destroy Silicon Valley using, um, earthquakes, in order to control the world’s microchip market.

Like I said, nothing about A View to a Kill should work. And yet … it’s so awful that it’s good. The camp just appeals to me. Don’t get me wrong–this is not a good movie. But I could re-watch it. I could call my friends, say “you are not going to believe this shit,” have a movie night, and make popcorn. And we would laugh our asses off and have a blast.

Notable Moments: In addition to this being Roger Moore’s final appearance as James Bond, A View to a Kill is Lois Maxwell‘s final turn as Moneypenny. It remains to be seen what Naomi Harris will do with the role in the modern incarnation, but thus far Lois Maxwell is the best version of the character put to film. Subsequent iterations foisted a sad spinster quality onto Moneypenny–a desperate lust for 007’s penis that made her a pitiable character. Maxwell’s Moneypenny always had dignity. She was playful, she flirted, but she kept her head held high. Maxwell had put forth the idea that Moneypenny’s character should grow more as the series continued–she envisioned Moneypenny getting promoted to M at some point. Now that is an intriguing idea. Hopefully, Naomi Harris’ version of Moneypenny will get that opportunity. Alas, it was not to be for Lois Maxwell. 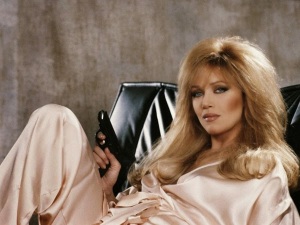 Gadgets: spy sunglasses, a ring camera, and a, um, tape recorder. For a campy-ass movie, the gadgets are pretty skimpy.

Bond Girl: Sigh. We had a good thing going for a moment. Melina Havelock and Octopussy were two formidable Bond Girls in a row–giving the misleading impression that producers were finally learning to respect their female characters. Stacey Sutton is a disappointing Bond Girl as it is, but the fact that she destroyed the flow of progress only makes it worse. Tanya Roberts, everyone’s fifth favorite Charlie’s Angel, only makes things worse with her abominable acting skills. She’s an oil heiress who lost her family oil rig to Zorin and a geologist to boot! Too bad she isn’t a credible scientist in the slightest. Stacey Sutton was a relatively new concept for a Bond Girl in 1985, one who would become an incredible cliche by the end of the decade. For producers, it represents a kind of faux-feminism. Have a beautiful woman, treat her like an object, reduce her to a damsel in distress–but no one will mind any of this if you just make her a scientist! Never mind if she lacks any brains at all–people don’t actually expect this stuff to make sense, do they?? Stacey Sutton is very pretty. That’s all you can say about her. Even her helpless squeal is irritating. 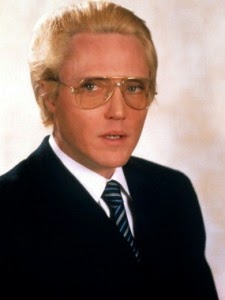 Supporting Bond Girl: I guess there’s Alison Doody’s here-and-gone Jenny Flex, but let’s face it–the only line she actually speaks is her name. Then there’s KGB operative Pola Ivanova (played by Fiona Fullerton), but all she does is show up, sleep with James, and get outsmarted by him. So let’s give this category to the Henchwoman (see below for more).

Villain: There’s a grand tradition of over-the-top Bond villains, so somehow Christopher Walken manages to fit right in just by being himself (with the addition of platinum hair, which only amplifies his crazy look). Max Zorin apparently started out as a KGB agent–because in the post SPECTRE 007 world all villains had to at least be slightly affiliated with Russia–but breaks from the Russians to enact his own dastardly plans. Coloring within the lines isn’t exactly his thing. He likes horses, castles, betraying people, and androgynous women who could kill him with their bare hands (especially androgynous women). It’s a credit (or discredit, depending on your outlook) to the outrageousness of Bond villains that Zorin is actually overshadowed by several Bond baddies on most best-of lists. I don’t know if he’ll make my top five, but he’ll probably be close.

Henchwoman: Glory be, everyone, let’s give it up for May Day and her real-world counterpart, Grace Jones. I can sum her up in two words: bad. ass. She’s gloriously unhinged like Fiona Volpe. She’s unique and stands out like Jaws, Odd Job, and Nick Nack. This is a woman who can fuck up your shit. You do not want to mess with her. She’s the kind of lady who doesn’t take to betrayal well. I mean, when Zorin leaves her to die in an explosion, what happens? She teams up with 007 to remove the bomb from its location, then rides that bomb straight to hell in order to make sure Zorin knows she fucked him over. Revenge, bitches.

Theme Song: After a string of easy listening duds, producers made the wise decision to move into the present and hire Duran Duran to perform the title song (another not-so-subtle attempt to appeal to the MTV crowd). By no means is it a great song, but it’s fun–and that’s something the Bond series was definitely lacking in the music department since The Spy Who Loved Me more than ten years earlier. It’s good enough for a middle-of-the-road status as Bond songs go–and at this point that was probably the best we could ask for.

During the title sequence it’s the standard set-up (shadowy nude and semi-nude women dance and alternately point guns and have guns pointed at them), with some colorful black light paint to spruce things up. And instead of silhouettes doing gymnastics, we just have shadowy women pretending to ski with strings from a pom pom taped across their nipples. I’m not kidding.

Iconic Moment: Let’s give it to Roger Moore’s love scene with Grace Jones, just for the sheer weirdness of it.

You can find links to all the Bond movie reviews as well as ‘Best of’ and ‘Worst of’ lists on my Bond Project page. Up next: The Living Daylights.