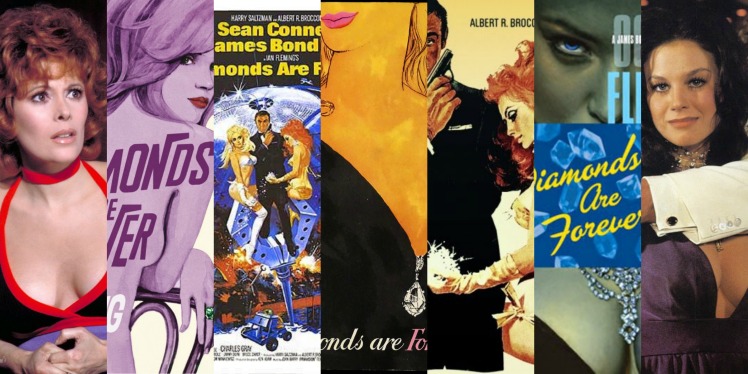 Like Moonraker, Diamonds Are Forever was one of my least favorite movies in the Bond series. Unlike Moonraker, the book didn’t improve things. Moonraker was one of my favorite books in the novels so far, but Diamonds is among the worst. The plot of the book and the movie have the same basic set-up (James Bond pretends to be Peter Franks, a man hired by a diamond smuggling ring to get diamonds into the USA, in order to infiltrate the higher levels of the gang), but the movie puts 007’s nemesis in the center of the plot: Ernst Stavros Blofeld of SPECTRE. Blofeld had yet to be introduced in Ian Fleming’s novels, so naturally the movie’s plot diverges a bit in order to accommodate a supervillain. They also overcomplicate the plot so much that it becomes utterly confusing.

Let’s take a deep dive into a pool of diamonds, shall we? Be warned: spoilers lie ahead. 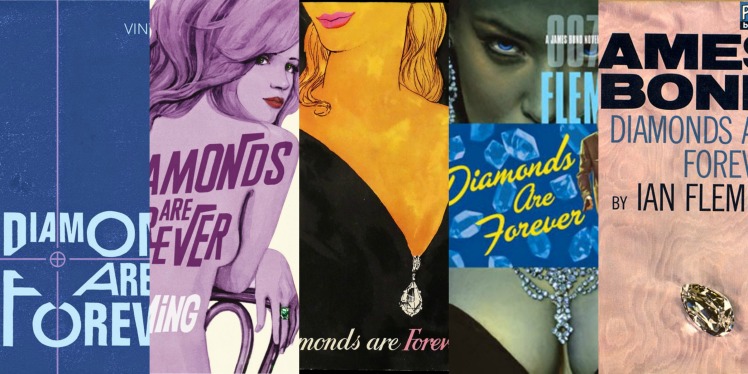 I have a full review of the book here, so I’ll just touch on the plotpoints that are different in the movie now. Britain’s economy is being threatened by competition in the diamond industry from a company in the USA. Intelligence believes the Spangled Mob (led by brothers Seraffimo and Jack Spang) is smuggling blood diamonds from Africa through a pipeline and making a fortune off of them. Bond’s mission is to assume the identity of Peter Franks, a small-time hustler who had been hired to move the illicit diamonds from London to New York City (Intelligence arrests Franks so he won’t get in the way by showing up instead of Bond).

Bond meets up with Franks’ handler for the trip, a beautiful and sarcastic woman named Tiffany Case. Case is a tough cookie with a bad past that has left her a cynical loner. She gets her orders in the form of cryptic voice mails from ABC, the head of the smuggling operation. She travels to New York with Bond by plane, has a flirtatious dinner with him, and walks out of his life to return to Las Vegas.

Bond has some bizarre side ventures alternately trying to get paid by the mob (so he can continue needling them to let him get higher in the food chain to find out who’s behind all this), represented by mafia man Shady Tree, and deliberately causing them trouble by teaming up with his old buddy Felix Leiter (who now works as a Pinkerton detective since the CIA dropped him after he was maimed by a shark in Live and Let Die). Their sabotage mission means Bond can’t get paid for his services, so the mob sends him to Las Vegas to get paid at a card table in their casino, The Tiara, instead.

Naturally, when Bond shows up at the card table for his appointment, Tiffany Case is the dealer. She deals him five winning hands, then Bond busts the deal he has with the mob to leave with his payday by gambling it all at the roulette table and winning even bigger. The next day, Bond and his driver (an ally Felix set him up with) are shot at in a car chase and Bond is kidnapped. Lesson: never piss off the mob.

Bond is taken to a ghost town a few miles outside of Las Vegas. Seraffimo Spang tortures Bond before leaving him tied up in a car of an old train and going to sleep (?). Tiffany springs Bond loose and the two set the place ablaze before riding off in a trolly car on the tracks to another ghost town. They don’t get far before Seraffimo gives chase in his train, intending to ram them off the rails. Bond and Tiffany switch the tracks and Bond manages to shoot Seraffimo dead as he passes. Somehow. Tiffany and Bond make it back to the highway, where Felix Leiter comes to the rescue because he’s somehow managed to piece everything together.

Both the film and the movie end with 007 and Tiffany Case setting sail for England and getting attacked by Seraffimo’s henchmen Mr. Wint and Mr. Kidd (who have only had a peripheral presence in the book to this point). But in the book, once the henchmen are dispatched Bond goes to Africa to take down the pipeline once and for all, shooting Jack Spang (who, conveniently, turned out to be ABC) and his helicopter out of the sky. Mission complete, Bond gets ready to go back to his flat in London, where his beloved (?) Tiffany Case is waiting for him.

The villain(s) barely have any screentime, so the book is mostly a slow-moving, lifeless affair. 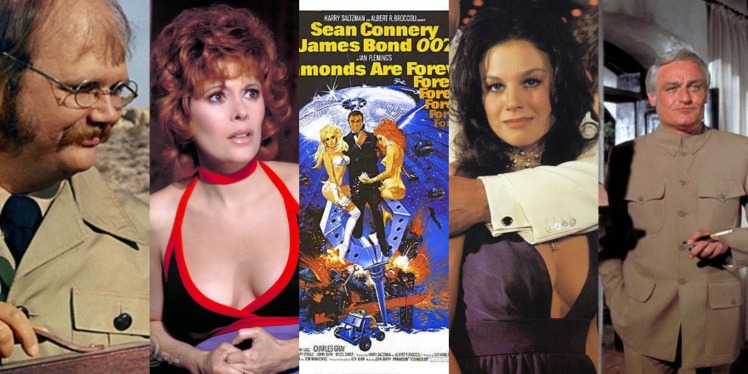 The full rundown on the movie is here, but let’s look at what’s different. Since Blofeld had James Bond’s wife killed off on their wedding day in the last movie, Diamonds Are Forever opens with 007 seemingly tracking Blofeld down and murdering him in a mud bath (?) for revenge. Blofeld lookalikes were in the process of being constructed (which will be important later, because obviously Blofeld isn’t really dead).

Two guys, Mr. Wint and Mr. Kidd, are killing off diamond smugglers for no apparent reason. This makes British intelligence suspect that someone is stockpiling conflict diamonds to depress the economy (or something). Bond kills Peter Franks and assumes his identity to pick up the diamonds from the kookily dressed Tiffany Case.

Bond meets up with Felix Leiter (who has not been maimed and is still with the CIA here) to make the trip over to the US. For some reason they have Peter Franks’ body with them so they get it cremated and Bond is almost murdered by Wint and Kidd, who show up and lock him in a coffin set for cremation. He’s somehow saved by Shady Tree, a stand-up comedian (?) who moonlights as an agent of the smugglers, who is pissed that the diamonds 007 brought him are fakes.

Bond is let go for some reason and arrives at a casino named The Whyte House after its eccentric Howard Hughes-esque owner, who lives in the penthouse but hasn’t been seen in years. Shady Tree is killed by Wint and Kiddafter a stand-up gig for some reason. I mean, he wasn’t funny, but damn.

Bond picks up a dull girl with a terrific rack named Plenty O’Toole (really) and takes her up to his room, where goons promptly toss Ms. O’Toole out the window and into the pool below. Turns out Tiffany Case is waiting for him and she gets jealous easily (why she had goons in there with her while she waited in 007’s bed is up for debate). Tiffany agrees to pick up the real diamonds but double crosses James until she realizes the gang killed Plenty O’Toole after mistaking her for Tiffany Case (?).

Bond ends up in a mod house out in the middle of nowhere and finds out the diamonds are being used to make a large satellite. He goes looking for Bert Saxby, the casino manager, and has a bizarre fight with two nearly-naked lusty girls named Bambi and Thumper (really).

Confused yet? Bond scales the side of the casino to get to the penthouse and finds himself confronted by not one but two Blofelds. He kills one but it turns out to be another double (yes, he killed a double in the beginning as well). He gets knocked out and wakes to find the satellite is now in space somehow and ready to destroy nuclear arms in America, China, and the Soviet Union so Blofeld can auction the satellite (and global domination) to the highest bidder. Or something. It’s very confusing.

Bond and Leiter locate Blofeld and the kidnapped Tiffany Case on an oil rig in the ocean–because that’s totally right there near Las Vegas. Tiffany has some comedic hijinks while Bond saves the day.

As in the book, Tiffany and James get on a cruise back to England, where they are attacked by Wint and Kidd. James dispatches them both, and unlike the book, the adventure ends there.

Also unlike the book, the movie is not short on villains. But it’s a confusing, muddled mess that also manages to be boring.

Neither sets me on fire, but the book wins by a landslide. Yes, it has problems with pacing (and is seriously lacking in the villain department), but the movie is a confusing awful mess. It’s really no contest.

For more, check out my Bond page–which has movie recaps and best-ofs. Up next, we’ll compare the film and book of From Russia, With Love.