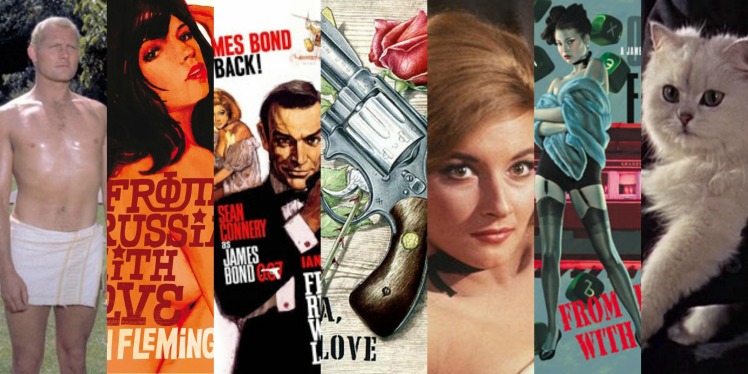 President Kennedy himself professed to be a big fan of the novel From Russia, With Love–including it in his ten favorite books. The film adaptation was the last movie he ever saw, as he had it screened in The White House just before his fateful trip to Dallas. Untimely death aside, that seal of approval helped legitimize the Bond series to the world at large. The plots of both the movie and the novel are very similar, but as we discussed in the comparison of Diamonds Are Forever, producers shoehorned James Bond’s nemesis, Ernst Stavros Blofeld, into the plot in place of the novel’s enemy organization, SMERSH. Blofeld had yet to be introduced in the novels, but by the time the movies got into production he was Bond’s greatest enemy. Let’s take a look at the differences, shall we? Beware of spoilers lurking ahead.

SMERSH, The Soviet Union’s deadly intelligence branch, has made some uncharacteristic missteps of late and wants to make a statement to the world that they are the best there is. They decide to target British Intelligence and specifically its agent 007, James Bond–who was the cause of two of their recent mistakes.

SMERSH enlists the beautiful Tatiana Romanova  to lure 007 to Istanbul by claiming to have fallen in love with him through transcripts of his adventures (and the attached photos). She claims to want to defect to Britain to be with him and has a Spektor coding machine to offer as a trade for safe passage. Bond meets up with MI6’s man in Istanbul, Darko Kerim, to try to grab the machine and find out if a secret plot is afoot.

Bond and Kerim witness a gypsy fight where Kerim is nearly killed. Romanova demands to be taken away with the Spektor device by Orient Express. Bond and Kerim agree because they have no bargaining power. On board the train, Bond and Romanova have rampant sex in their berth while Kerim gets to find ways to get rid of three Soviet agents on board the train. Kerim is killed by the final agent, but manages to kill the agent as well. Bond makes contact with M at the next station to update him. M asks if he wants another agent as a reinforcement and Bond leaves it up to M, but asserts that he is still in control. At the following station Soviet assassin Red Grant boards and impersonates a British agent sent by M (in reality M sent no agent). Grant drugs Romanova and threatens to kill Bond and defame his name to undermine the credibility of the Secret Service before 007 manages to get a knife from his trick brief case and kill Grant.

The next day, 007 shows up at what was supposed to be Grant’s rendezvous with his boss Rosa Klebb. Bond manages to subdue Klebb, but as French reinforcements arrive (with Rene Mathis from Casino Royale), Klebb manages to kick Bond in the calf with a poison-tipped knife concealed in the tip of her shoe. Bond collapses to the floor and the novel abruptly ends on a cliffhanger. 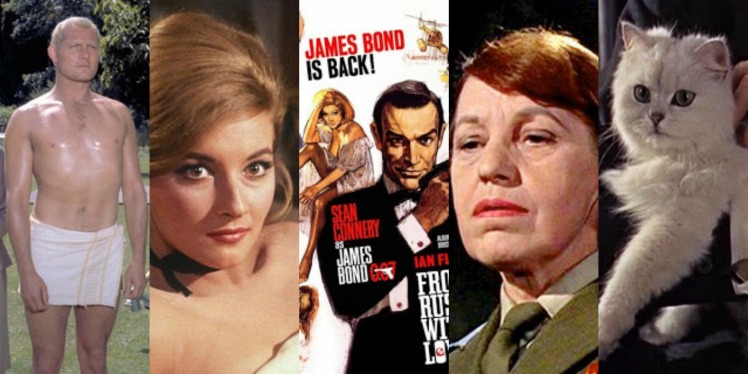 You can read my full rundown of the movie here, but let’s run through the plot with the differences. SPECTRE is pissed that James Bond killed their agent Dr. No and wants revenge. Rosa Klebb, SPECTRE’s Number 3 agent, hatches a scheme to seduce Bond with a beautiful girl and a decoding device.

The movie downplays the ‘fallen-in-love-from-afar’ angle a bit by making the scheme that Romanova wants to defect to Britain and has taken a Lektor cryptographic device (I guess they had to change the name to avoid SPECTRE comparisons) as a show of good faith. She has specified that she will only meet with James Bond to surrender the device and travel to England because she’s familiar with his exploits.

When Bond arrives in Istanbul he meets up with MI6’s man there, Ali Kerim Bey. To beef up the villain’s presence in the movie Red Grant tails 007 and saves him from being murdered in a gypsy fight (no one else is going to claim his prize). To amp up the action, Bond and Bey must get a set of plans from Romanova and use them to infiltrate the Soviet base in Istanbul to steal the device themselves. Again, Grant secretly helps them along by killing a rival agent who wanted to intercept the plans.

Lektor device in hand, Bond and Bey take Romanova aboard the Orient Express to escape and Grant follows. Grant kills Bey and a Soviet officer they had uncovered on board, making sure Bond and Romanova will be unable to get off the train as planned. When Bond asks for reinforcements, Grant kills the agent who comes to meet him at the next station and assumes his identity. Grant drugs Romanova and threatens to kill Bond and defame his name to undermine the credibility of the Secret Service before 007 manages to get a knife from his trick brief case, stab Grant, and strangle him with Grant’s handy garrote wire.

Blofeld, who’s face is not shown at all in the movie (the camera instead focuses on his fluffy white cat), offers Rosa Klebb one last chance to defeat James Bond and get the Lektor device back. There’s an elaborate boat chase before Klebb disguises herself as a maid to infiltrate the hotel room in Venice where Bond and Romanova are staying. Klebb fights 007 and attempts to kill him with the poison-tipped knives in the tip of her shoes, but Romanova shoots her.

This is a tough call. The movie’s inclusion of Blofeld and SPECTRE, plus the additional action sequences, complicate things perhaps a touch too much. But I like the way the movie downplays the hard-to-swallow idea that Romanova fell in love with James Bond from afar. Still, I would probably give the edge to the book. Darko Kerim is a larger than life ally than Ali Kerim Bey, his screen counterpart, for one thing.

For more, check out my Bond page–which has movie recaps and best-ofs. Up next, we’ll compare the film and book of Doctor No.