Pierce Brosnan’s 007 shame spiral has officially arrived. From its wildly overblown opening sequence to its threadbare plot, The World is Not Enough is without a doubt one of the worst all-time Bond movies. It would be nice if we could call it the low point of Brosnan’s tenure as James Bond, but fasten your seat belts. It gets worse.

During an overblown opening sequence, oil magnate Robert King is killed. Why? Because of incredibly convoluted backstory, of course. This series knows no other kind. Here goes. Years earlier, King’s daughter Elektra was kidnapped by Soviet terrorist Renard. She was tortured and held for ransom. King turned to his close friend M for guidance, and she took the hard line her MI6 training instilled: never give in to terrorists. She thought she could use Elektra to get Renard out in the open long enough to take him down. Unfortunately, in this case that advice turned out to be a terrible mistake. Elektra continued to be tortured and sexually abused by her captors until she finally escaped on her own and slowly began piecing her life back together.

When M finally got a man inside Renard’s organization, his attempt to assassinate Renard failed just as miserably as the rest of the operation. He managed to put a bullet in Renard’s head, but it didn’t kill him. Now the bullet is stuck in his brain, cutting off his ability to feel anything. It will eventually kill him, but for now he just wants to watch the world burn. Especially the ones he feels are responsible for what happened to him: King, Elektra, and M.

And that’s just the backstory!

Believe it or not, things get even more complicated. Bond is sent to protect Elektra from Renard’s men, which means he has rampant sex with her (of course) while she tries to finish the oil pipeline her father had started to build across the Middle East. When he discovers that one of her employees has ties to Renard, Bond follows the lead to a nuclear test site where Renard promptly steals a nuclear device. He also catches on that Elektra herself may be in cahoots with Renard.

Turns out he’s right, but Elektra has already lured M into her trap to finish her revenge scheme. You see, she fell for Renard during her captivity in a weird hybrid of Stockholm Syndrome/manipulation to get him to lower his guard long enough to let her escape. She also never forgave her father and M for abandoning her. Now she and Renard plan to get revenge and use the nuclear device to blow up the competing oil pipelines crossing into Europe so Elektra can control everything.

The action set pieces are frankly ridiculous. I’ve used the world overblown twice, but here it is again. The plot, as complicated a sit is, really just exists as flimsy filler connecting one sequence to the next. Which is a shame, because believe it or not there was a solid idea at the heart of The World is Not Enough. Like For Your Eyes Only, it explores revenge and betrayal. Unlike any other Bond movie, though, the ultimate betrayal in this film is so much more personal because it comes from the Bond Girl. The big baddie is practically a red herring. Elektra can’t be called the main villain (since she isn’t afforded any of the honors that come with it), but she’s definitely the one pulling the strings. Renard has resigned himself to death, so he’s really just helping Elektra pull off her revenge scheme on his way out of this world. Which is not enough. Apparently.

And that’s the problem: they had an audacious idea, but they wouldn’t commit to it (it wouldn’t be until Casino Royale that the idea of a Bond Girl betrayal would finally pay off). They had an interesting idea about warring over oil pipelines, then buried it behind nonsensical action sequences. They finally gave M something to do, then muddied that up by bringing back Robbie Coltrane’s silly Russian gangster for comic relief that was never funny in the first place.

Let’s not even go there with Christmas Jones for now.

Notable Moments: Desmond Llewelyn played Q for 17 films, and The World is Not Enough marked his retirement from the role. To transition, he appeared with John Cleese, who would officially take over for him in the next Bond adventure. Sadly, Llewelyn died in a car accident shortly after the movie was released. The World is Not Enough is also the first Bond film in which 007 directly kills one of the Bond Girls. In other news, this is also the first time a Bond movie won a Razzie Award (for Worst Supporting Actress: Denise Richards).

Gadgets: Many of them. In the opening sequence 007 uses a switch in his sunglasses to detonate his gun like a grenade. He gets another tricked out BMW. He has x-ray sunglasses. There’s a watch that lights up like a flashlight. And the most ridiculous of all: a jacket that releases a protective bubble around its wearer. That later shields 007 and Elektra from an avalanche. Seriously.

Ally: Let’s just forget that Valentin Zukovsky ever came back, shall we? He was the worst part of GoldenEye, and here he dragged down a movie that was already carrying too much dead weight.

Bond Girl: Believe it or not, this was a tough category to call. Not only is Christmas Jones the more (in)famous Bond Girl, she was also publicized a great deal more–at least in the U.S. She even gets better placement in the movie poster. Jones is hard to ignore (even though that would be ideal). But in the end, this is Elektra King‘s category. She has more screentime than Jones and she gets higher billing in the credits to boot. Anyway, to the enormous credit of Sophie Marceau she’s the best thing about the movie. Don’t get too excited, though, because the bar is incredibly low.

Elektra starts out your typical Bond Girl: stunningly beautiful, haunted by a tragic past, a good skier. She’s determined yet vulnerable–negotiating and protecting her oil pipeline with ferocious intensity, but turning into a damsel in distress the moment bad guys show up. But it’s all a con she’s putting on to get revenge on M. In the end, it turns out she’s just as twisted as your typical Bond villain (and she has a physical abnormality to boot).

Bond producers had been playing with the idea of what a Bond Girl could be since introducing Pierce Brosnan in GoldenEye, and Elektra represents the next evolution of that experimentation. GoldenEye‘s Nadia Simonova was a meta-critique of the traditional, cliched Bond Girl. Tomorrow Never Dies gave us the first Bond Girl who could be Bond’s equal, and The World is Not Enough gave us a Bond Girl who could be his nemesis. It’s an audacious idea that should have had better payoff. If only the movie representing Elektra had been better. And if only they hadn’t undermined her by introducing a secondary Bond Girl to fit the more cliched role. 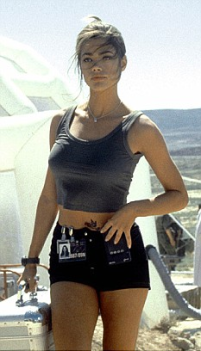 Supporting Bond Girl: Sigh. Here we go. When it comes to bad Bond Girls, Christmas Jones is in a tight race to the bottom with The Man With the Golden Gun‘s Mary Goodnight and Diamonds Are Forever‘s Plenty O’Toole. Sorry, that’s Doctor Christmas Jones. Because producers hired Denise Richards to play a nuclear scientist, which totally makes sense, right? The sarcasm is killing me.

Richards has never been known for her acting, but casting her as a nuclear scientist was a definite bridge too far. Her ability to say dialogue convincingly was strained enough without asking her to talk about plutonium like she’s an expert. Basically, when producers decided to ‘modernize’ Bond Girls, the go-to solution was to make them scientists of some kind. And really, I can only think of one case where it worked out (Nadia Simonova in GoldenEye, for the record). Holly Goodhead was an astrophysicist or something. Stacy Sutton was a geologist. All were awful, and Christmas Jones is no exception.

The problem is that there’s no character to speak of. Christmas Jones is all surface: hot body, hardcore job, and a touch of surly attitude. That’s meant to show you that she’s a woman of substance, except that producers forgot to give her actual substance. They just threw in a Bond Girl who hit all the tired cliches so they could have 007 get laid at the end of the movie. All they did in the end was undermine the real Bond Girl’s storyline.

Making matters worse, someone involved in the making of The World is Not Enough had a serious hard-on for the video game version of Lara Croft in Tomb Raider, because they dolled Christmas up in some serious Lara drag with her cropped tank top, short shorts, and boots. It just comes across as desperate.

Villain: Like Christmas Jones, Renard exemplifies what goes wrong when producers try too hard to give a character tics and forget to give them depth. Bond villains frequently have some wildly eccentric traits: superfluous nipples, bloody tears, metal hands. But the great ones have personality and menace to back them up. Renard is a shell of a character; Elektra has three times the personality that he does. As played by Robert Carlyle, he’s wooden and boring. So yeah, Renard has no sense of touch or pain, but that doesn’t mean he should have the personality of a tin can. To be fair, the script is never quite clear about just how little Renard can feel. He certainly has no sense of touch. But they imply that he has emotions, and yet he walks around like the Frankenstein monster. It doesn’t make sense.

Also, if you pick up a scalding-hot rock, your hand will get burned even if you can’t feel it happening. That’s just lazy scriptwriting, but then there are so many instances of that in this movie.

Henchman: none of any consequence.

Theme Song: Yet another disappointment. Why producers hired Garbage to do a theme song is beyond me. They had a popular album at the time, but Bond songs usually go to much more seasoned performers. It was basically a rather bald attempt to appear hip and current. Well, it didn’t work because “The World is Not Enough” failed to chart in the U.S. and failed to crack the top ten in the U.K. It might have helped if the song was better, but as is it’s a slow, boring, totally un-memorable song with nothing to recommend it. It doesn’t even have a good hook. Really, if they were going to insist on hiring Garbage (and I’m not convinced they should have), they could have at least let Garbage do what they were decent at, which is create a rock song. Lead singer Shirley Manson just doesn’t have the voice for this kind vocal centerpiece. If it has one thing going for it, “The World is Not Enough” is at least inoffensive. That keeps it from being an epic disaster on par with “The Man With the Golden Gun” or “Die Another Day.” But it’s definitely not good.

Iconic Moment: The most remembered moment of this movie only qualifies because it’s awful. In fact, it pretty much epitomizes the insane level of bad puns Pierce Brosnan reduced 007 to. Yes, it’s the moment at the end of the film when James and Christmas Jones finally get down to dirty business, prompting James to remark that he thought Christmas only came once a year.

You can find links to all the Bond movie reviews as well as ‘Best of’ and ‘Worst of’ lists on my Bond Project page. Up next: Die Another Day.